Vibration-Based Anti-Biofouling of Implants 207
For the former method, many ﬂuorescence dyes with different emitting colors
are commercialized already and can be chosen to attach onto proteins before
or after adsorption. They usually are excited by a speciﬁc wavelength of light
and emit a speciﬁc longer wavelength of light, for example, Fluorescein IsoThio-
Cyanate (FITC) can be excited by blue light and emit green light. The ﬂuorescence
photos of surfaces (PZT) adsorbed by BSA-FITC and the relation between intensity
and BSA concentration are shown in Fig. 9.2(a). The ﬂuorescence intensity is
linearly depends on the quantity of adsorbed BSA. In addition, from Fig. 9.2(a),
the intensity is a function of BSA solution concentration and incubation time and
the function can be portrayed well by the Langmuir adsorption isotherm.
The EIS measures the impedance between two electrodes. The impedance (Z)
is like resistance, and follows the Ohm’s law; and is not like resistance because
that it depends on the frequency of signal and voltage and current of signal is
unnecessarily in phase. The measurement is usually a three electrodes setup:
working, counter, and reference electrodes. The surface of interest, such as protein
adsorption surface, is as working electrode, the much larger inert material, such
as platinum, is as counter electrode. Two plots, Nyquist and Bode plots, are used
to interpret the measured data.
46
Nyquist plot separates Z into real and imaginary
parts, resulted from the equivalent electrical circuit, can represent the parameters,
such as resistance and capacitance, between working and counter electrodes. Bode
plots shows Z or phase with the function of frequency so that reveals the frequency
information. The Nyquist plot of BSA adsorbed surface is shown in Fig. 9.2(b).
The inset is the equivalent circuit of the plot, where R
el
represents the electrolyte
resistance between working and reference electrodes, R
ct
and constant-phase el-
ement (CPE) are charge-transfer resistance and electric double layer capacitance
between electrolyte and working electrode. If there is protein adsorption on the
surface, the R
ct
and CPE will change. For example, as shown in Fig. 9.2(b), the R
ct
decreases 90% when the surface was incubated in BSA solution for 1 hour because
that BSA can help charge transfer from the electrolyte to the electrode. In addition,
the surface after vibration shows increasing resistance which means less proteins
adsorbed on the surface. The vibration on the attenuation of protein adsorption
will discuss in the later section.
9.3 INTERACTIONS BETWEEN PROTEINS AND SURFACE
In the scale of protein, some interactions between protein and surface are crit-
ical: van der Waals (VDW), electrostatic double-layer (EDL), and hydrophobic
interactions.
49,50
Sincealltheexperimentswereperformed on a piezoelectric plate,
all parameters related to the surface were those of piezoelectric plate. In this
chapter, we use PZT as the material.
Van der Waals force includes momentary attractions between molecules,
diatomic free elements, and individual atoms and other than those due to covalent
bonds or to the electrostatic interaction of ions with one another or with neutral
SO13997_text.indd 215SO13997_text.indd 215 26/01/2011 3:50 PM26/01/2011 3:50 PM 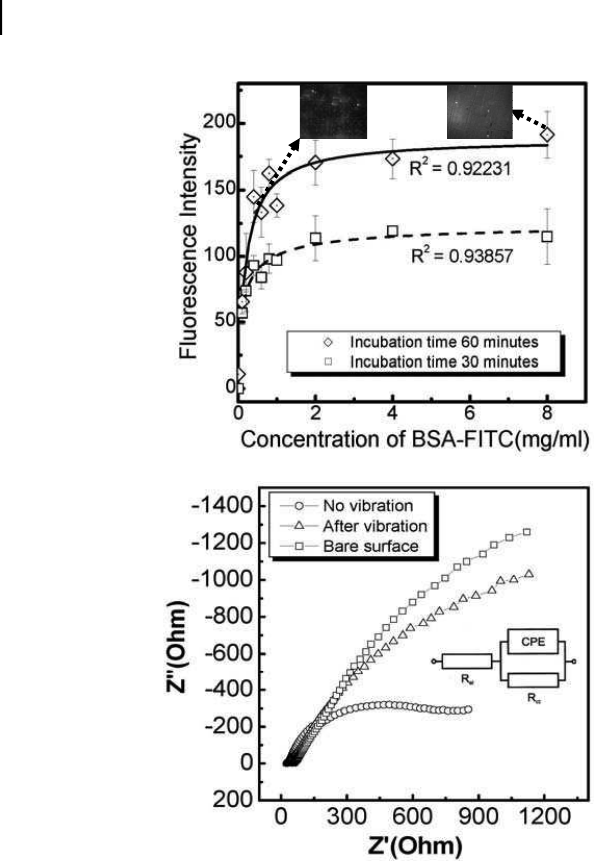 208 P. Y. J. Yeh, J. N. Kizhakkedathu and M. Chiao

D


E

Figure 9.2. (a) BSA adsorption isotherms on a piezoelectric (PZT) surface incubated at
37
◦
C for 1 hour and 30 minutes. The ﬂuorescence intensity was transfer from tri-color to
256 gray scale by Adobe Photoshop 6.0. The intensity is linearly to the quantity of adsorbed
BSA, and is a function, which follows the Langmuir isotherm, of BSA concentration. Two
inserted photos are ﬂuorescence photos in pointed experimental condition. (b) Nyquist
plot of impedance between working electrodes (PZT) and platinum counter electrode. The
voltage data (in Z measurement) is corresponding to the reference voltage. The inset is the
corresponding equivalent circuit. Reproduced with the permission from Yeh et al. (2007).
For color reference, see page 274.
molecules. And it comes from the temporary ﬂuctuating dipoles of molecules and
is correlated as the molecules come closer to originate an attractive force. There
is always a VDW force between two molecules or surfaces, and has a power-
law dependence on the separation between protein and surface. The VDW force,
SO13997_text.indd 216SO13997_text.indd 216 26/01/2011 3:50 PM26/01/2011 3:50 PM