232 H. Zeng
The spatial resolution of CLSM is diffraction limited, i.e. at the order of the
wavelength of light used for imaging. Thus, micron and sub-micron resolutions
are readily achievable with CLSM.
31
The actual useful depth of CLSM is limited
to 100–200 μm, even with the most penetrating near IR illumination. Different
imaging modalities are available with CLSM depending on the types of optical
signals utilized for imaging formation. For example, reﬂectance confocal imaging
mode uses elastic backscattering light, while ﬂuorescence confocal imaging utilizes
sample ﬂuorescence emission. Confocal Raman imaging can be performed by
utilizing inelastic (Raman) scattering.
CLSM applications in biomaterials research is expanding with advantages
such as convenience of use, in that no special sample preparation is required as
compared to electron microscopy, and high spatial resolution than conventional
light microscopy. Confocal microscopy can resolve details at interfaces that
could previously only be seen using electron microscopy of specially processed
specimens.
32
To assess the biocompatibility of poly-β-hydroxy butyric acid (PHB)
polymer, CLSM has been used to study the structural organization of cellular
molecules involved in adhesion using osteoblastic and epithelial cell lines.
33
Fig-
ure 10.5 shows example confocal images from this study demonstrating that for
cells cultured on PHB polymer, the organization of the actin cytoskeleton was
impaired. To devise better strategies for developing biomaterials optimized for
particular therapies and treatments, a novel, CLSM based 3-D screening method
for analyzing interactions between cells and new biomaterials has been developed
to cut initial search times by more than half.
34
Recent technology advancement has
resulted in a reﬂectance mode CLSM that is capable of acquiring video rate cellular
resolution images from human skin in vivo.
35
This could presumably be adopted
to study the interactions of MEMS biomaterials with biological tissues in vivo in
animal models.
10.3.2 Spectroscopy Methods
Spectroscopy methods are routinely used to analyze the constituent elements and
chemical structures of biomaterial surfaces. In this section, we will discuss the
most commonly used three types of traditional spectroscopy techniques, namely,
X-ray photoelectron spectroscopy (XPS), secondary ion mass spectroscopy (SIMS),
and attenuated total reﬂection Fourier transform infrared spectroscopy (ATR-
FTIR).
10.3.2.1 X-ray Photoelectron Spectroscopy
X-ray photoelectron spectroscopy (XPS) also known as ESCA (electron spec-
troscopy for chemical analysis) is the most extensively used technique for the
characterization of biomaterial surfaces,
1,3
It is used to determine the surface
chemistry of a biomaterial in its “as received” state or after surface modiﬁca-
tions, e.g. adsorption and retention of chemicals such as antibiotics and bonding
agents,
15
for the detection of immobilized proteins,
36
understanding the chemistry
SO13997_text.indd 240SO13997_text.indd 240 26/01/2011 3:51 PM26/01/2011 3:51 PM 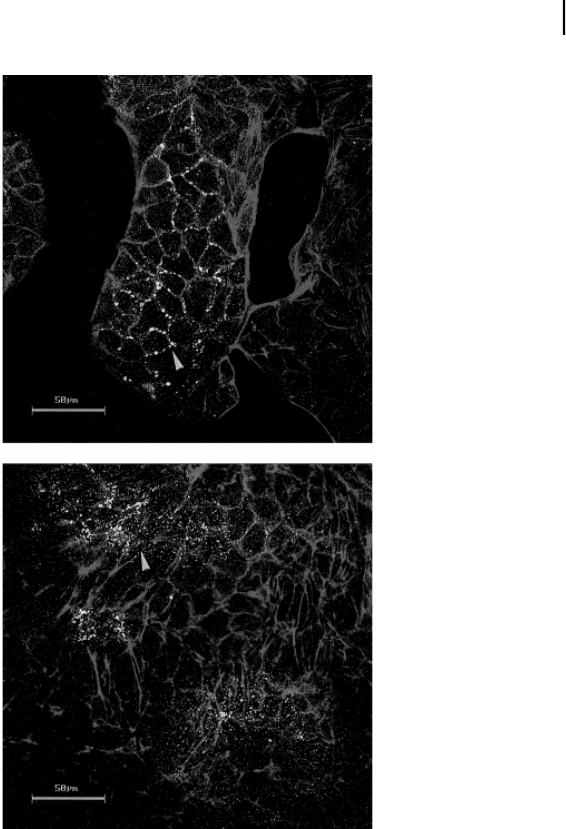 Characterization of Biomaterials 233
Figure 10.5. Fibronectin formation (green) and actin ﬁlament formation (red) in epithelial
mHepR1 cells cultured on the biomaterial PHB (below) compared to control cultures
(above). Note that in control cultures the actin ﬁlaments are structured in ﬁbrils showing
colocalization with ﬁbronectin (arrow head) in contrast to PHB cultured cells, where the
organization of actin ﬁlaments is more irregular and the colocalization of ﬁbronectin with
actin is lost (arrow head) (CLSM images taken with LSM 410, Carl Zeiss Jena). With
permission from.
33
For color reference, see page 276.
of the structure, formation and stability of plasma treated surfaces,
19
as well as for
the characterization of the steps of formation of thin coatings.
37
XPS spectra are obtained by irradiating a material with a beam of aluminium
or magnesium X-rays while simultaneously measuring the kinetic energy (KE) and
number of electrons that escape from the top 1 to 10 nm of the material being
analyzed.
38
XPS requires ultra-high vacuum (UHV) conditions. The kinetic energy
of the emitted photoelectrons is unique for different elements and is sensitive to the
SO13997_text.indd 241SO13997_text.indd 241 26/01/2011 3:51 PM26/01/2011 3:51 PM