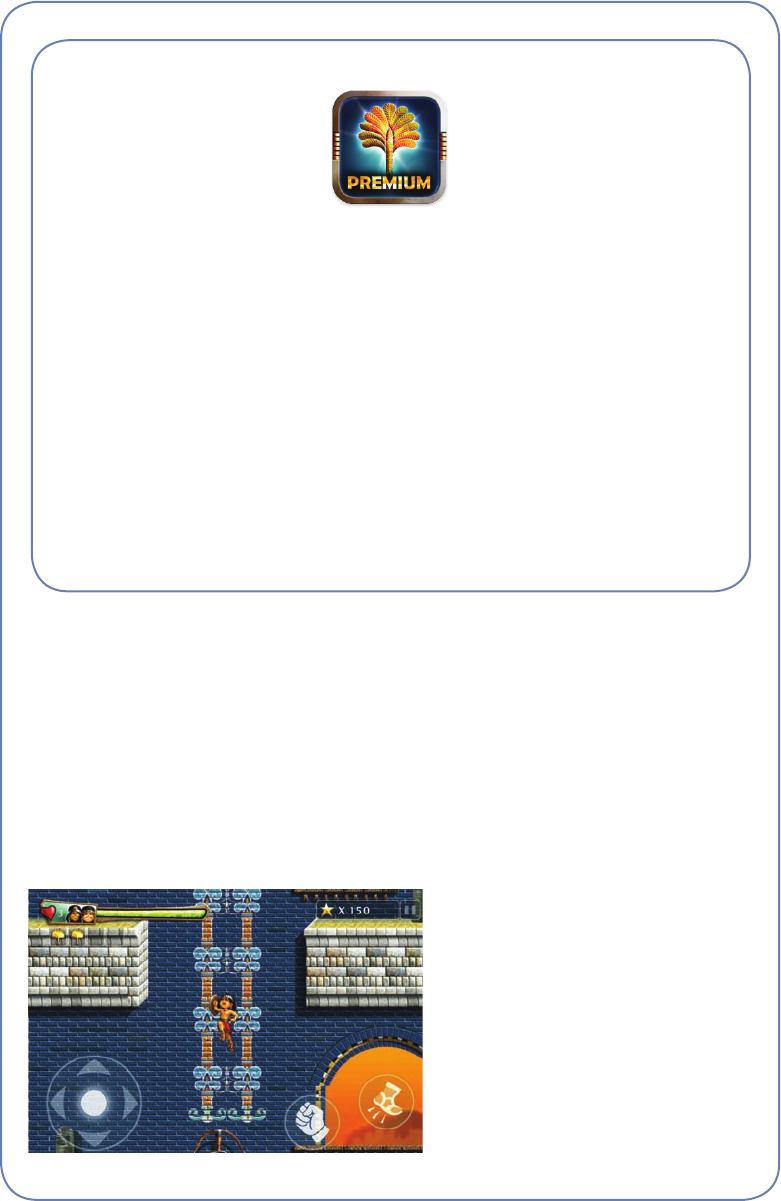 Pla orm: iPhone/iPod Touch (iPad version available separately)
Price: $1.99
Developer: Cosmos Interac ve
Released: April 8, 2010
Babylonian Twins Premium
What Is It?
Babylonian Twins is a de antly old-school platformer for people who crave a challenge.
 e game stars a pair of Iraqi princes on a quest to stop an evil wizard from destroy-
ing their kingdom. You won’t be able to control both princes simultaneously, but you
can switch between them at any point.  is turns the inactive prince into a stone statue,
which players can then hop onto (with the other twin) in order to reach previously inac-
cessible goodies or areas.
 ere’s something oddly tricky
about keeping track of both princes.
Many puzzles require you to send the
two boys to opposite ends of a level
to trigger switches or collect items
that will allow them both to progress.
Levels are o en quite spacious, both
in height and width, making explora-
tion and even backtracking a lot more
fun than in other two-dimensional
platformers in the App Store.

25Babylonian Twins Premium
ere’s a rudimentary one-buon combat mechanic (one twin wields a club, the other
has a mace), but enemies are oen extremely dangerous, and mace-happy players are
likely to nd their health drained very quickly.
Despite my insistence on calling Babylonian Twins a “platformer,” the game really isn’t
about hopping from one oating platform to another; it’s about exploring a beautifully
designed artistic throwback to ancient Iraq. e fact that you get to listen to a wonderful
soundtrack and solve fun puzzles while doing so is just a bonus.
Behind the Game
One of the many bad years for Iraq was 1993. Economic sanctions that had been imple-
mented by the United Nations in 1990 were in full force, and the eects were devastating.
e Iraqi literacy rate plummeted, the infant-mortality rate skyrocketed, and an embargo
on the manufacturing and importation of chlorine (which the UN worried could be used
to create chemical weapons) le the citizens of Iraq desperate for clean water.
roughout these tough times the Iraqi people did what
they could, and some found ways around the sanctions restrict-
ing imported goods. One example of a popular import was the
Commodore Amiga, the successor to the Commodore 64. In
the late 1980s Iraqis had begun importing the Amiga 500 (the
low-end Commodore Amiga) in bulk, despite a cost of three to
four times more than the standard retail price for the machine.
One early adopter of the Amiga was a young Iraqi named
Rabah Shihab. Aer seeing a home video of the Commodore
Amiga running Defender of the Crown and Deluxe Paint in 1988, Shihab saved hard-earned
dinar for a full year before he was able to purchase an Amiga of his own. He and his broth-
er played constantly, using games like Speedball and KickO as an outlet for their competi-
tive natures.
An absence of hard copyright laws at the time allowed Iraqi companies to pirate
soware and sell the copies at a high price, eectively making the country a no-man’s-
land for developers and leaving Iraqis like Shihab and his brother with no alternative to
purchasing pirated games. Large-scale imports of the Amiga continued into the early
1990s, and by 1993 the Amiga’s market penetration was relatively high compared to
other computers.
Shihab went on to study computer engineering at the University of Baghdad.
Inspired by other games, such as Team17’s Superfrog and Konami’s Maze of Galious,
Shihab—who had been programming and creating games on his MSX computer
since the age of 13—met with friends and fellow students Murtadha Salman and
Mahir Alsalman, and together they set out to develop their own game. Shihab’s goal
was to create a game rich with Iraqi history, culture, and art that, as Shihab now
Stascs
• Esmated number of mes Cosmos
Interacve has raised/lowered the
game’s price: 150
• Times downloaded (free): 460,000
• Times downloaded (paid): 40,000