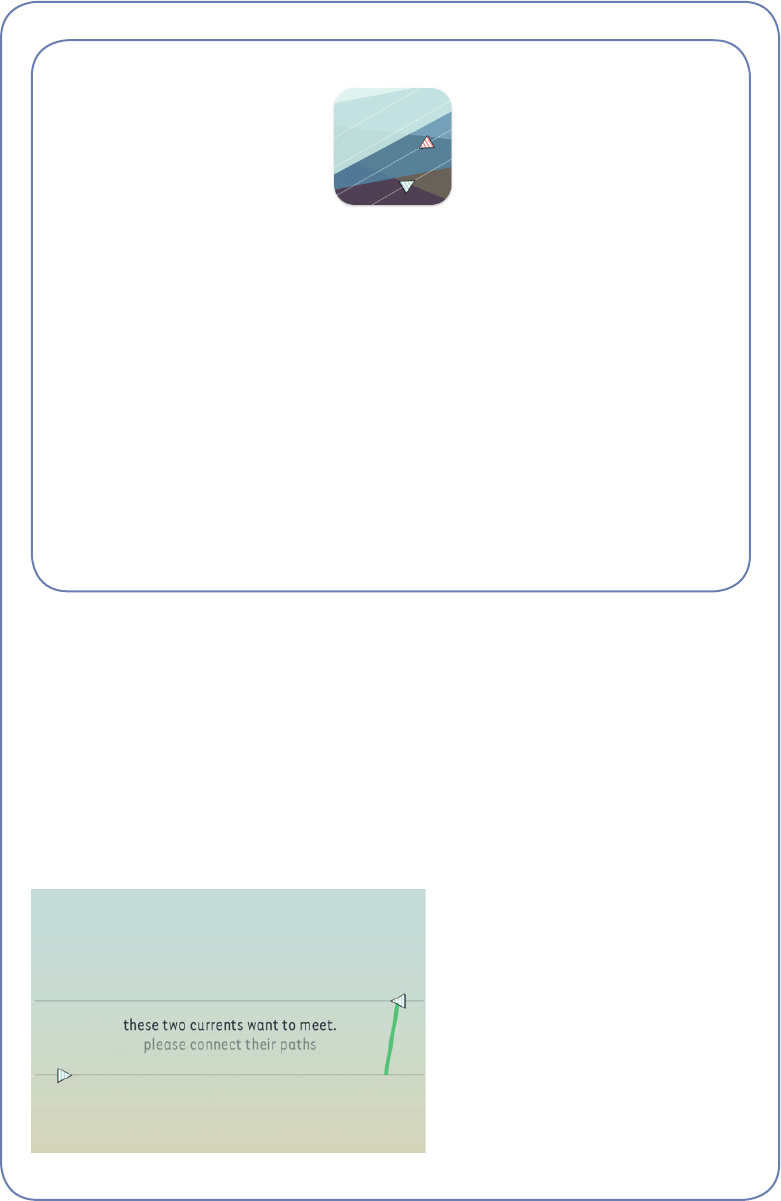 Plaorm: iPad only
Price: $1.99
Developer: Zach Gage
Released: November 23, 2010
Halcyon
What Is It?
Halcyon doesn’t look like much; one glance at the screenshot below might lead you
to believe that the game is nothing more than lifeless lines and arrows plastered on a
screen. In actuality, it’s a surprisingly rich twitch-action game: arrows come in from the
side of the screen and your job is to use lines drawn with your nger to connect and
direct same-colored arrows towards each other. So, for example, if a purple arrow is y-
ing in from the top line and another purple arrow ies in from the opposite direction
on the boom line, you’ll want to
draw a line connecting the top ar-
row to any part of the boom line.
As soon as you do, that top ar-
row will rocket across the screen
on the line you’ve just drawn and
slam into the other purple arrow,
destroying both of them.
In order to win, you’ll want to
prevent arrows of dierent colors
from hiing each other. As the

107Halcyon
game’s pace picks up, dozens of arrows will ll the screen. Arrows on a crash course with
dierent-colored arrows will light up red, like the planes in Flight Control do when they’re
in danger of colliding.
Halcyon is really a test of reexes more than anything else, but it works because it keeps
you engaged. Music is also a big part of Halcyon, because when the arrows collide, they
strike a note. Since many arrows collide in rapid succession, you’ll actually create a make-
shi song. On top of this, each level is intentionally designed to look like a harp, so when
you run your nger across the screen to draw a line you’ll pluck the virtual strings and
create other notes. All of these elements combine to make the game a calming, musical
experience.
Halcyon is one of my favorite examples of a game that couldn’t be done on any plat-
form other than the iPad. Given the speed and precision that the game demands, draw-
ing the lines with a mouse would be nearly impossibleit’s a testament to some of the
unique things that are possible with a touch interface.
Behind the Game
Zach Gage is an artist who focuses on the relationship between people and technology.
is has manifested itself in a number of dierent ways. One program that Gage has cre-
ated is called Can We Talk?. It’s a chat program for having serious conversations.
In the tutorial video for Can We Talk? Gage explains that chat has never been perfect
for having serious conversations because it’s hard to tell if the other person is paying at-
tention to the screen. Can We Talk? records whether users are looking at the screen and
whether they’ve covered the chat with another window. is information is relayed to the
other person, so each user knows whether messages are being ignored or simply haven’t
been read yet. “Being born in 1985, I was around just before the massive public adoption
of the Internet, and my adolescence mirrored the adolescence of the Internet as it related
to public culture,” Gage explains.
Gage notes that in recent years, people have begun to spend signicant portions of
their lives online. “Most of my conceptual art focuses on what this means,” he says. In
short, his biggest interest is examining the “strange rules” that govern online communica-
tion. He’s a sociologist for the 21st century. Gage’s interest in rule systems carries over and
mixes with his passion for creating games. “Instead of nding strange systems to explore
and manipulate, I create them,” he says. “Instead of making their way through a story, in
my games, players (hopefully) learn a small set of rules and then discover how limitlessly
those rules can be applied, given the right amount of skill and time.”
When Gage bought an iPad, he says he was oored by the device. He sees it as “what
laptops were meant to be” and believes that in just a few years people will be using tablets
as replacements for their regular computers. “I knew I had to make a game on it,” he says.
“But what?”