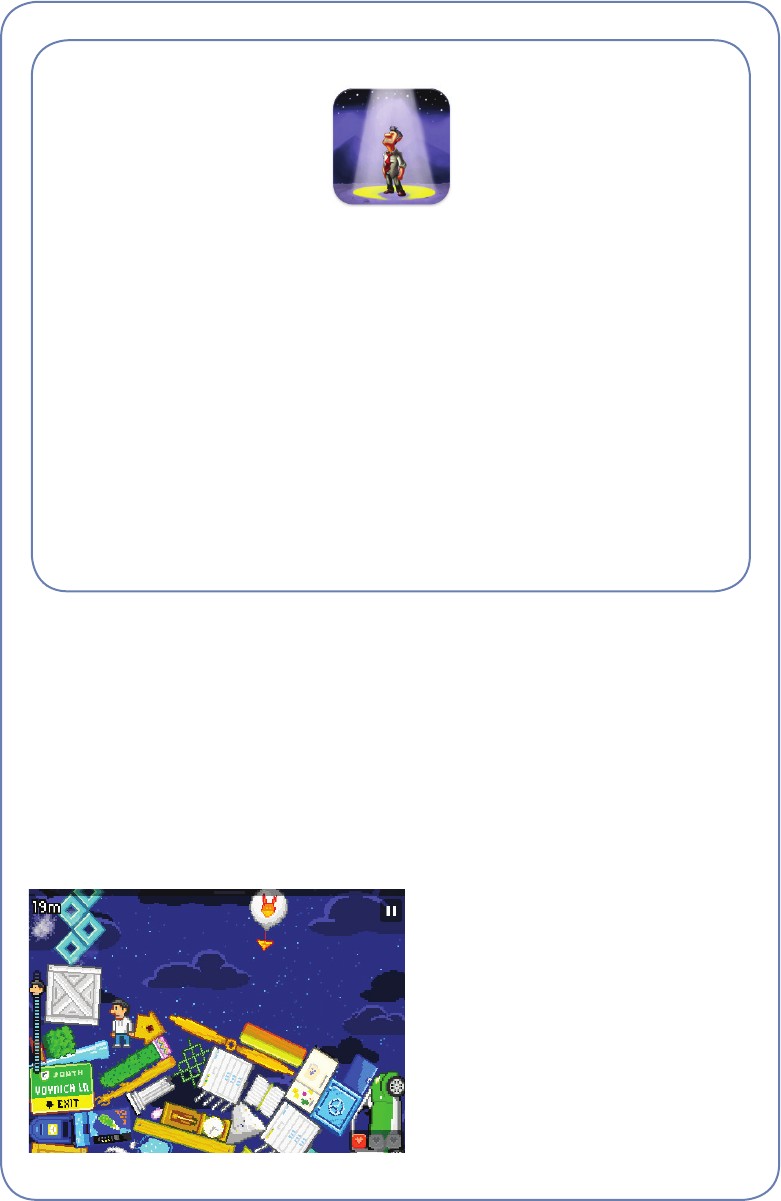 Plaorm: iPad/iPhone/iPod Touch (universal app)
Price: $1.99
Developer: Big Bucket Soware
Released: August 10, 2010
The Incident
What Is It?
What if random objects started falling from the sky, crashing into the ground around you
and puing you into serious danger? What would you do, especially if you were le with
very lile room to move to escape the incoming aerial barrage?
In e Incident, you’ll get to answer that question. As a nondescript businessman in a
shirt and tie, you’ll be faced with a world bent on destroying you with a relentless torrent
of stu. Everything from household furniture to Egyptian sarcophagi stream from the
sky, forcing you to tilt your iDevice
while tapping the screen so you can
hop and run from le to right to avoid
geing splaered.
Garden gnomes. Barber-shop poles.
It doesn’t maer what it is; it will
kill you. Luckily you can take three
bashes to the head before succumb-
ing, and you’ll occasionally be able
to collect coins and hearts, which can
give you extra lives and restore your 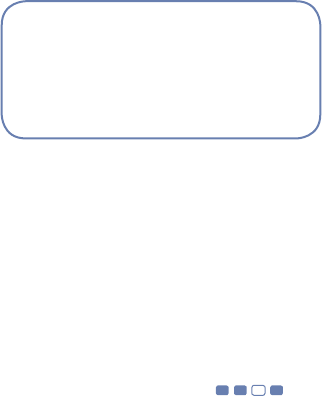 125The Incident
health. ere’s also a white line that appears at the top of the screen to tell you where the
next object will fall from (as well as the relative size of the object), allowing players to get
out of the way in time.
As objects stream down from above they’ll begin to pile up into heaps, which you’ll
have to scale in order to avoid geing lost in the piles of garbage. Eventually the heaps
rise above street level, and then above the rooops. Soon enough you’ll see mountains
in the background, and aer enough time you’ll break through the clouds and begin to
leave Earth altogether. e trick is to constantly keep moving to keep your head above
the churning waves of stu below your feet. It’s dicult, but players who make it to outer
space will get a nice surprise.
One of the coolest features of e Incident is that the iPad version allows you to ex-
port the game to your TV (assuming you have the proper equipment). If you’re one of
those rare people with both an iPad and an iPhone (or an iPod Touch), you can also use
the smaller iOS device as a wireless controller for the iPad, even when it’s in TV-mode.
In essence it turns your iPad into a game console for your television, and e Incident
looks surprisingly good with this setupthe pixel art looks great even when blown up
on bigger TVs.
Behind the Game
e idea for e Incident came to Ma Comi out of nowhere. “I turned to a colleague and
asked what he thought of a simple game where random things are falling from the sky and
your job is to jump and dodge them,” he says. “When you die, your score is your height.”
e seed had been planted in Comi’s mind, and he contacted his friend Neven Mrgan
who agreed that the game sounded like a good time. e two men got to work, concen-
trating on the game as much as they could during their spare time.
Comi and Mrgan have only seen each other face-to-face on
Skype or Facetime because they live on opposite sides of the
globe; Comi is from Australia, while Mrgan lives in the United
States. According to Comi, this didn’t turn out to be much of
a hindrance. “I Internet-met Neven when he linked to my TV
Forecast Dashboard Widget from his blog in 2007,” he explains.
“Each day, there was a window of a few hours where we were
both awake. We used that time to catch up on each other’s prog-
ress.” Comi says that the mutual reliance on each other kept them both motivated and
working on the game.
When development on e Incident began, Comi had a decent stream of money com-
ing in from other apps he had created, so he decided to switch to a four-day workweek.
“e whole nancial-crisis thing was happening so the company I worked for was only
too happy to pay me less money,” he says.
Stascs
• Development me: 9 months
• Number of unique items in the game:
367