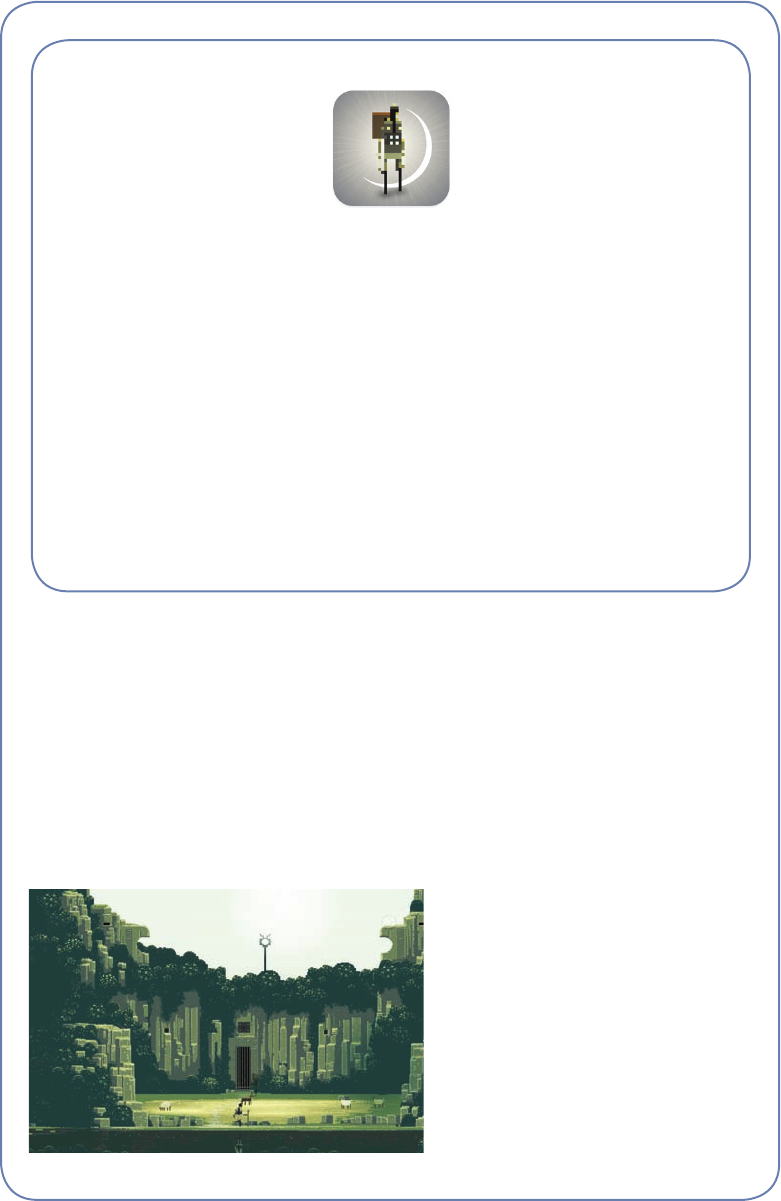 Pla orm: iPad/iPhone/iPod Touch (universal app)
Price: $4.99
Developer: CAPY/Superbrothers/Jim Guthrie
Released: March 23, 2011
Superbrothers
Sword and Sworcery EP
What Is It?
From the very  rst moment you boot up Superbrothers: Sword and Sworcery EP, you’ll
know this is a game unlike anything you’ve ever played before. Right o the bat you’ll be
struck by the game’s visuals: all the characters are incredibly lanky, with limbs that are
only a single pixel thick. It’s almost as if graphic-design principles from the Atari era have
been brought into our modern, high-de nition times. Surprisingly, the result is gorgeous.
 e game itself is a sort of point-and-click adventure that takes more than a few story
cues from the Zelda series. You
play as the Scythian, a female war-
rior sent on a quest to  nd three
golden triangles. Players tap on the
screen to move, and use the iPad’s
accelerometer to manage their in-
ventories and keep track of their
quests.
For the most part, S&SEP is a
very slow-paced game in which
you’re supposed to just calmly soak 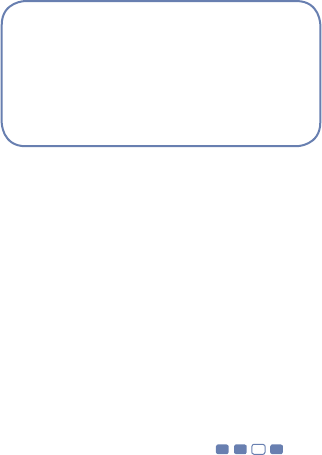 221Superbrothers
in the story, sound, and visuals while solving puzzles. On rare occasions, though, the sto-
ry will put you in a combat situation. is scenario requires you to turn your iDevice to its
portrait position, and thrusts you into a real-time bale in which you’ll have to use timing
and on-screen buons to block aacks and defeat foes.
e story includes a cast of mostly ridiculous characters—there’s Logfella the axman,
Dogfella (Logfella’s faithful canine companion), and Girl, a shepherd. Occasionally you’ll
be able to read these characters’ thoughts in a giant magical book called e Megatome,
which can be useful for guring out what to do or where to go next. e dialogue in the
game is humorous, and makes you feel like the characters don’t take themselves very seri-
ously. It’s a unique element of the game’s design, and is yet another thing that makes the
game stand out in the crowded App Store marketplace.
Behind the Game
Sword and Sworcery’s story began in 2009, at a party thrown by 1UP.com during the Game
Developers Conference. While waiting in a hallway for a friend, Kris Piotrowski and Na-
than Vella noticed a “tall blonde dude” handing out postcards with his artwork on it. “We
grabbed one and, immediately recognizing the lanky Superbrothers-style pixel art, start-
ing yelling ‘WE HAVE TO MAKE A GAME TOGETHER’ at Craig D. Adams’ face until
he said yes,” claims Piotrowski. “at’s prey much how the project started.”
Six months later, the newly-formed Sworcery team set out to make what they called
“a strange, musical, Twierable, pixel-adventure game.” Superbrothers (an art and design
company where Craig Adams works as creative director) was to lead the game’s art and de-
sign, and Canadian singer-songwriter Jim Guthrie was on board to create an experimental
soundtrack. Piotrowski and Vella’s company, CAPY, was tasked
with providing additional design, project support, and technical
muscle. “We started o with a very loose concept, more like an
idea for a high-level goal,” says Piotrowski. “We wanted to create
‘a record you could hang out in’—a magical, relaxing, inviting
lile world that you could go for a walk in, poke and prod, and
listen to Jim’s music set to Craig’s beautiful artwork.”
Piotrowski and Adams had a considerable batch of ideas that
they hoped to squeeze into the game. Among many other things, they wanted to some-
how t in a combat mechanic inspired by Nintendo’s classic Punch-Out! series and an
environment that changed according to moon phases in the real world. Not surprisingly,
it was a considerable challenge to t all of their ideas into one game. “We spent most of
our time trying out crazy ideas and coming up with even crazier ideas to x our earlier
crazy ideas,” Piotrowski says.
One of the earliest builds of Sword and Sworcery was a short demo that allowed players
to walk through some woods. CAPY/Superbrothers decided to submit this demo to the
Stascs
•Development me: 1.5years
•Total budget: $196,000
•Times downloaded: 250,000