Get full access to Computer System Designs: System-on-Chip and 60K+ other titles, with free 10-day trial of O'Reilly.

Introduction to the Systems Approach

The past 40 years have seen amazing advances in silicon technology and resulting increases in transistor density and performance. In 1966, Fairchild Semiconductor [84] introduced a quad two input NAND gate with about 10 transistors on a die. In 2008, the Intel quad-core Itanium processor has 2 billion transistors [226]. Figures 1.1 and 1.2 show the unrelenting advance in improving transistor density and the corresponding decrease in device cost.

Figure 1.1 The increasing transistor density on a silicon die. 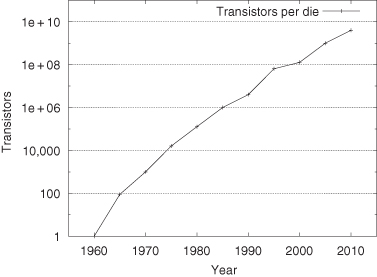 Figure 1.2 The decrease of transistor cost over the years. 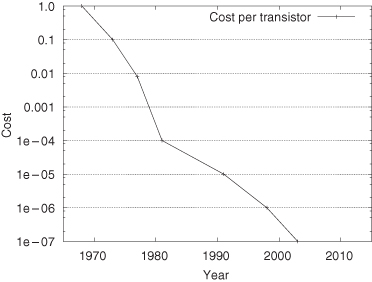 About 50 years ago, a seminal text, Systems Engineering—An Introduction to the Design of Large-Scale Systems [111], appeared. As the authors, H.H. Goode and R.E. Machol, pointed out, the system’s view of engineering was created by a need to deal with complexity. As then, our ability to deal with complex design problems is greatly enhanced by computer-based tools.