Economic Impact of Open Source on Small Business: A Case Study by

Get full access to Economic Impact of Open Source on Small Business: A Case Study and 60K+ other titles, with free 10-day trial of O'Reilly.

Far and away the most common applications selected by customers are Content Management Systems such as WordPress, Drupal, and Joomla. We also took a close look at e-commerce systems such as Magento, osCommerce, and Prestashop.

These applications in turn typically run on an open source software stack consisting of Linux, Apache, and MySQL. (Bluehost also offers PostgresQL, but few users choose it, as MySQL is the default database installed with most of the applications that rely on databases.) Domain name services are managed by PowerDNS.

Bluehost does have a small number of users running on Windows and SQL Server, but they are legacy customers from an acquisition, and did not feature in our analysis.

Bluehost is thus slightly more skewed to open source than the overall Internet population. According to Netcraft’s July 2012 web surver survey [6], 61.45% of known websites are hosted on Apache, 14.62% on Microsoft servers, 11.09% on nginx, and 3.44% on Google Web Server. The Web thus runs on approximately 85% open source web servers, while almost all of Bluehost’s customers are on Linux and Apache.

Returning to the Bluehost data, we first looked at all users in the dataset and selected only those users who have a tool installed. By tool we mean access to a software package or application that lets you add functionality or features to your website. Of the million users, 504,831 had a tool installed. We are using this as a proxy for someone who is doing something more than just owning a domain name and running pure HTML on their site. Of the 504,000 users, let’s now look at the most-used open source tools beyond the operating system and web server: 301,401, or approximately 60%, of the tool users in the sample have MySQL installed; 389,542, or 77%, use PHP; and 336,125, or 67%, use JavaScript. 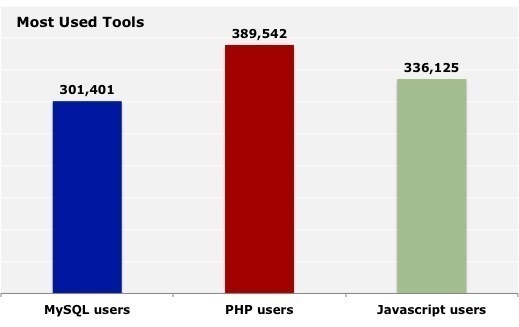 The choice of database and language is often driven by the choice of a higher level website management tool such as WordPress. WordPress was built as a big instance of PHP and MySQL, so users tend to use those same tools: PHP on the back end, and JavaScript on the front end. At the time this paper was being readied for press, Bluehost was the top provider listed on hosting tab of the WordPress.org web site. 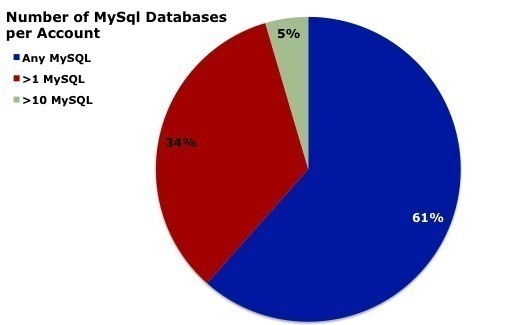 Bluehost users are offered an array of software packages to use with their hosted platform. The most common choices are a CMS such as WordPress, Joomla, or Drupal. A small percentage of users host their own e-commerce capabilities. A small percentage do their own programming in various open source languages.

The following tables represent the number of SMBs who use a particular tool. The total population of accounts that have tools installed rather than a pure HTML site is roughly 504,831 users out of the 1+ million users in the Bluehost data.

Now let’s look at the same data for e-commerce. You can see that osCommerce is by far the largest installed tool for doing e-commerce on a Bluehost account. However, it is still a tiny proportion overall. Note, however, that the CMS platforms themselves have e-commerce plugins. For example, the Cashie plugin for WordPress makes it simple to turn WordPress into an e-commerce platform, and the Ubercart and Drupal Commerce modules do the same for Drupal. Our measurements don’t include these e-commerce platforms.

Analysis of the CMS Tools

The big three CMSs are WordPress, Joomla, and Drupal. Whether you look at job postings, Google Trends, or Bluehost user data, WordPress is the leading CMS tool. For many SMBs, WordPress is all they need to engage their customers, and even do some rudimentary sales by putting a phone number on the website to call/order and taking a credit card directly via the phone. This was not measured in any of our data sets other than the customer survey, but it is quite common in practice.

Total installs reported by Water&Stone for WordPress are about 4.3 million compared to 1.7 million for Joomla. But in Weekly Downloads, WordPress is now about a factor of eight times that of Joomla, the next closest competitor in the small business market. This study corroborates the dominance of WordPress that we find in the Bluehost data.

TECHi has an excellent write up and infographic titled Open source wars: Wordpress vs Drupal vs Joomla [8] that provides a comparison of the features and costs of the three large CMSs. Here is a summary of cost components that may make the platforms more palatable for a SMB.

The chart below shows the programming languages used by Bluehost customers. PHP and JavaScript combined account for roughly 80% of the language activity on Bluehost. The only other language with a double-digit representation is Perl.

The chart below shows a logarithmic view of the programming languages and their growth among Bluehost customers for the years between January 2001 and June 2012. The most notable spike was in 2004 when Python and Ruby both suddenly burst up the scale. Python grew by a magnitude of 10 during the first few months and Javascript kept doubling its size every couple of months. Perl, Ruby, ASP, and Python seem to have hit a wall around 2007 and has been flat or on a slight trend down since. Note, however, that this chart does not truly reflect underlying language trends in the broader market, as it is significantly affected by changes in EIG support for various languages.

In the Appendix, we provide data on job posting trends for open source programming language jobs from O’Reilly Media’s historical job data mart. The key conclusion is that the hosting market is not representative of the programming language market as a whole. It is largely reliant on PHP for back-end scripting and JavaScript for front-end scripting.

Get Economic Impact of Open Source on Small Business: A Case Study now with the O’Reilly learning platform.