273
17
Energy for Transportation
Most of us make direct personal utilization of  mainly for two reasons. The
rst is domestic comfort, including lighting, cooking, heating, air conditioning, and
entertainment. The second is to transport ourselves and to move our goods, from
place to place. A reliable and efcient transportation system is vital in a modern
industrialized society, because it lets us move ourselves and our belongings and lets
others move to us the food and consumer goods we need, easily, at reasonable cost,
providing us with remarkable convenience.
HUMANS AND OTHER ANIMALS
For almost all of human history, transportation of ourselves, our belongings, or other
cargo has depended either on the use of human muscles or on the muscles of cer-
tain animals (horses, camels, oxen, and occasionally more exotic animals such as
elephants). From the dawn of early hominids several million years ago, the obvious
form of “transportation” was to use the energy of our own bodies for walking or run-
ning. We can also carry or pull things. Photographs of some of the primitive peoples
of the world show them carrying animal carcasses or other burdens slung from a pole
carried along by two or more people (as in Figure 17.1).
Animals were being used for transportation by about 3000 BCE. Over the years,
an extraordinary variety of animals has been pressed into service as draft animals:
horses, oxen, asses, camels, reindeer, llamas, elephants, water buffalo, and yaks.
Humans in northern Europe had been pulling loads on sledges since about 5000
BCE. No doubt the idea spread that one could just as easily hitch an animal to the
sledge rather than packing the load onto the animal itself. Then some unknown inven-
tor mounted a sledge on wheels. Drawings of these rst vehicles have been found
on tablets excavated in Mesopotamia, dating from about 3500 BCE (Figure 17.2).
Actual models of vehicles, sometimes even the vehicles themselves, have been found
in Middle Eastern tombs that date from 3000 to 2000 BCE.
Nowadays only very few of us can appreciate, or even imagine, what life must
have been like before the development of modern transportation systems. Almost
everyone lived out their lives in the immediate vicinity of the village or farm where
they had been born. There might be occasional visits to the local market or fair, or,
rarely, to the regional capital for some unusual event. For a few privileged people,
there might have been a once-in-a-lifetime religious pilgrimage. But for almost all
the people almost all the time, life was conned to a region limited by the distance
that could be traversed on foot or horseback. Even as recently as two hundred years
ago, people tended to remain settled and live close to where they were born. A major
reason for this state of affairs was the sheer physical difculty of moving oneself and
one’s belongings in the absence of reliable means of transport. 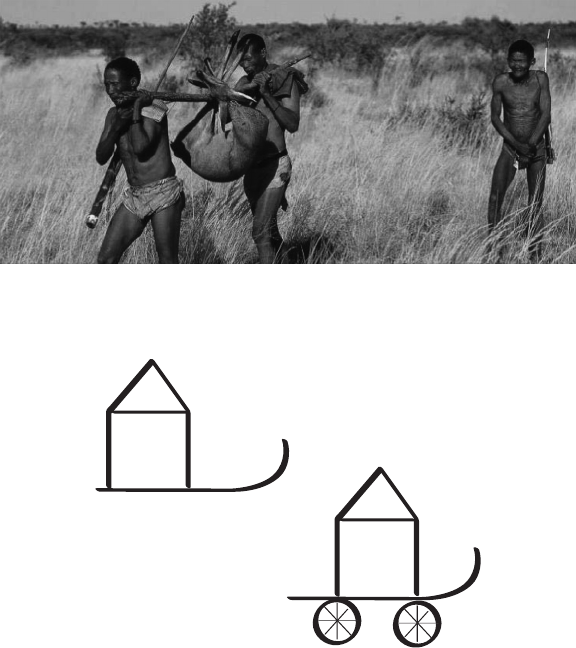 274 Energy and Society
It’s also likely that few of us can appreciate what life must have been like, especially
in cities, when reliance on horses represented a major aspect of transportation. And
yet, certain aspects of the horse-drawn transportation system sound remarkably mod-
ern. They include gridlock on city streets, excessive noise, fatal trafc accidents, and
air pollution. There were even concerns about diverting food crops to provide “fuel”
(i.e., fodder) for the horses, somewhat like today’s food vs. fuel debate concerning pro-
duction of ethanol from corn (Chapter 31) as fuel for automobiles. Around 1900, there
were 200,000 horses in New York City alone. No doubt most of the world’s metropoli-
tan areas were equally clogged with horses. The death toll from accidents involving
horses in 1900 was 1 per 17,000 citizens. A century later, with streets clogged by
automobiles, the death toll in car accidents in New York City was 1 per 30,000, nearly
half that of the “good old days” when life was supposedly simpler.
It’s an immutable fact of biology that what goes in one end of a horse sooner or
later emerges, in considerably altered form, from the other end. New York City’s
200,000 horses collaborated to produce about 2,300 tonnes of manure and kept on
doing it every single day, whether they were in harness or not. There had been a time,
FIGURE 17.1 These Bushmen show their reliance on human  for transportation.
(From www.horstklemm.com.)
FIGURE 17.2 An artist’s representation of wheeled vehicles in use in ancient Mesopotamia.