Get full access to Engineering Ethics and 60K+ other titles, with free 10-day trial of O'Reilly.

163
Chapter 14
2003: Northeast Blackout
163
THE REPORTED STORY
The New York Times Abstract:
Surge of electricity to western New York and Canada touches off series of
power failures and forced blackouts that leave parts of at least eight states in
Northeast and Midwest without electricity; widespread failures provoke evacu-
ation of office buildings, strand thousands of commuters and flood some hospi-
tals with people suffering in stifling heat; grid that distributes electricity to
eastern United States becomes overloaded shortly after 4
PM, tripping circuit
breakers and other protective devices at generating stations from New York to
Michigan; power in New York City is shut off by officials struggling to head off
wider blackout; Cleveland and Detroit go dark, as do Toronto and sections of
New Jersey, Penn, Conn, and Mass; hospitals and government buildings switch
on backup generators to keep essential equipment operating; airports through-
out affected states suffer serious disruptions, subways in New York City go out
of service, and commuter trains also come to halt; officials say cause of blackout
is under investigation but that terrorism does not appear to have played role;
Pres Bush says electrical grid might need to be modernized. (Barron, 2003)
THE BACK STORY
THE NORTH AMERICAN INTERCONNECTION
In 1999 the National Academy of Engineering (NAE) invited 60 engi-
neering societies to nominate the greatest engineering achievements of the
20th century. Based on these nominations, an NAE selection committee
Ch14-P088531.qxd 2/22/06 11:48 AM Page 163 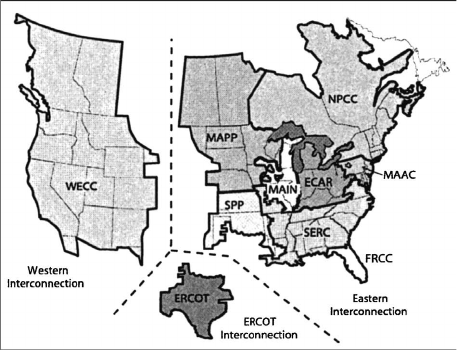 164 Engineering Ethics: An Industrial Perspective
Figure 14.1 North American interconnection.
Reprinted from U.S.-Canada, 2004.
determined the top 20 achievements. Achievement number one was wide-
spread electrification, which traces its roots to the work of Thomas Edison.
Edison’s work led to the first commercial power plant by 1882, based on
direct current (DC) generation. Later power plants utilized alternating cur-
rent (AC) and were based on the work of Nikola Tesla and Charles
Steinmetz. AC is preferable to DC because current losses are minimized
over long distances (NAE, 2005).
The North American power grid has the capacity to generate 950,000
megawatts (MW) from nearly 3500 utility organizations to more than
100 million customers and 283 million people. Electricity is produced at
lower voltages (10 to 25 kilovolts [kV]) at various generators, such as
nuclear and natural gas power plants. This electricity is “stepped up” to
higher voltages (230 to 765 kV) for bulk transmission across 200,000 miles of
transmission lines.The higher voltages reduce electricity loss from conductor
heating and allow power to be shipped economically over long distances.
Transmission lines are interconnected at switching stations and substations
to form a network of lines and stations called a power “grid.” Electricity
flows through the interconnected network of transmission lines along paths
of least electrical resistance. When the power arrives near a load center, it is
“stepped down” to lower voltages for distribution to customers. Some larger
industrial and commercial customers use intermediate voltages levels (12 to
115 kV), but most residential customers use 120 to 240 V. Although the
North American power system is commonly referred to as a grid, there are
actually three distinct power grids or interconnections (Figure 14.1). The
Ch14-P088531.qxd 2/22/06 11:48 AM Page 164

Get Engineering Ethics now with the O’Reilly learning platform.