Get full access to Final Cut Pro 7: Visual QuickPro Guide and 60K+ other titles, with free 10-day trial of O'Reilly. 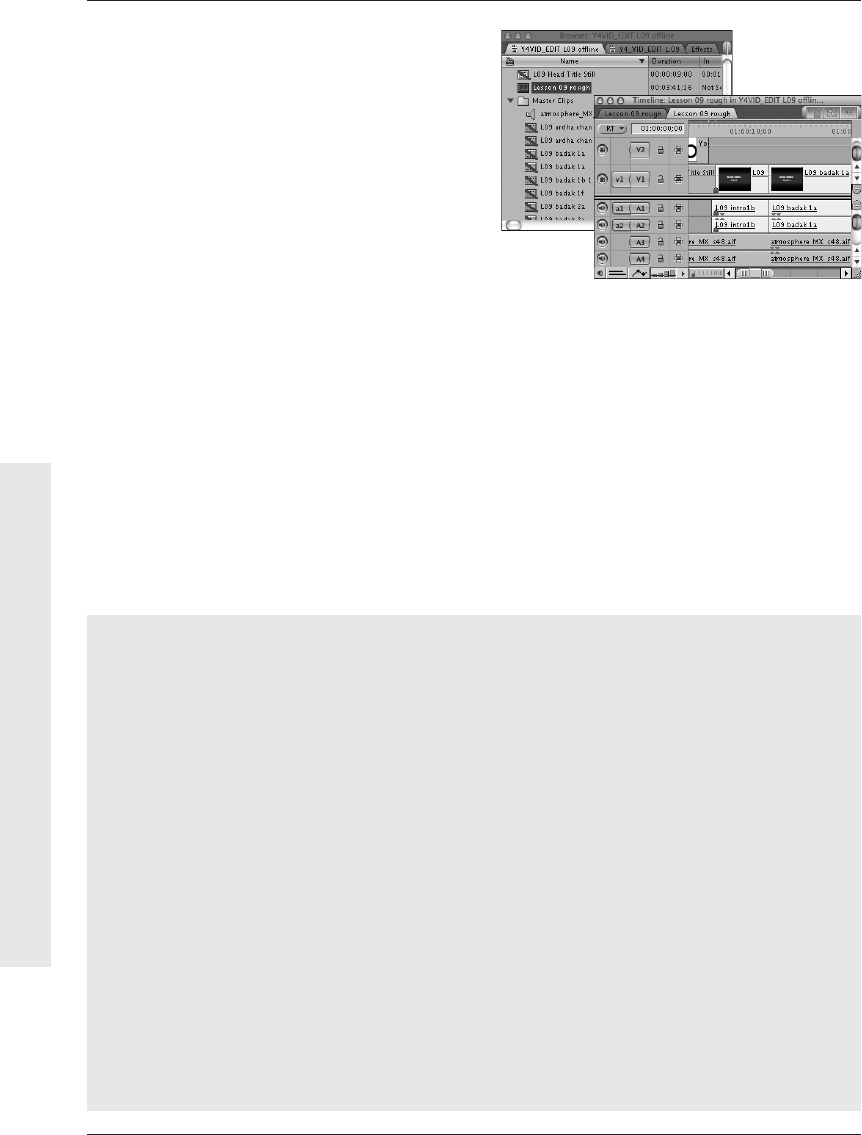 600
Chapter 20
Using the Media Manager
The Media Manager operation proceeds.
A status window displays the progress of
each stage in the operation. If the opera-
tion encounters an error, the processing
stops, and Final Cut Pro displays an error
message. When the processing is com-
plete, a new project file containing your
offline sequence appears on the front tab
of the Browser (Figure 20.25). Clips with
reel designations appear in the Timeline
as offline clips, but items that do not have
a reel name, such as graphics and digital
audio files, are not taken offline, so your
links to those elements remain intact.
Figure 20.25 When the processing is complete, a new
project file containing your offline sequence appears
on the front tab of the Browser.
Working with Graphics in Offline RT
If you’re using FCP’s low-resolution Offline RT format in the early stages of your edit, you
might be wondering if you need to make two different-sized versions of your graphics. After
all, Offline RT uses a frame size of 320 by 240 pixels, and your default DV-NTSC sequence
frame size is 720 by 480, so won’t you need to make a set of graphics in each frame size?
Nope. Final Cut Pro will resize your 720-by-480 graphics automatically to fit Offline RT’s
smaller frame size. Here’s how it works:
When you edit graphics that are larger than the sequence frame size into an Offline RT
sequence, Final Cut Pro automatically resizes the graphics by setting each graphical clip’s
Scale property to 50 percent to fit the sequence’s 320-by-240 frame size.
Any generators you edit into an Offline RT sequence will be scaled in the same way.
When you’re ready to convert your Offline RT sequence into a full, online-resolution sequence
(such as DV-NTSC), use the Media Manager to create an offline trimmed duplicate of your
Offline RT sequence in an online Sequence preset such as DV-NTSC. FCP will automatically
reset the scale of any graphics you used so they fit the new, online frame size. Any generators
you used in your sequence will also have their frame sizes reset to match the new online
frame size.