Get full access to Flexible Decision Automation for Your zEnterprise with Business Rules and Events and 60K+ other titles, with free 10-day trial of O'Reilly. 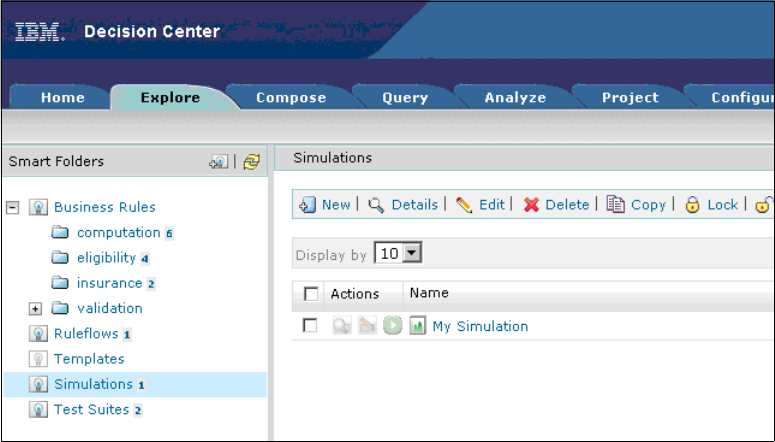 124 Flexible Decision Automation for Your zEnterprise with Business Rules and Events
The KPIs are defined at the scenario-suite format level and are not defined by the business
user.
In the simulation report, the values of all calculated KPIs are displayed. The same simulation
can be run against separate versions of the same ruleset. Separate reports can be compared
to check the differences between the KPI values. This capability allows the business user to
fine-tune the content of the business logic between various executions of the same simulation
until the desired KPI values are attained.
6.2 Testing and simulation architecture for z/OS decision
services
This section discusses the testing and simulation architecture for decision services on z/OS.
6.2.1 Test and simulation artifacts
This section lists the test and simulation artifacts.
Scenario suites
A scenario suite is an artifact that is created in Decision Center to define either a test suite or
a simulation (Figure 6-1).
A scenario suite is attached to a rule project (or a ruleset), for which it defines tests or
simulation cases. After its creation, you can run a scenario suite from within Decision Center
at any time. Each execution creates an execution report that is stored along with the scenario
suite in the Decision Center database.
Figure 6-1 Scenario suite artifacts in Decision Center: Simulations and test suites
Decision Validation Services archives
A Decision Validation Service (DVS) archive is an artifact that contains both a scenario suite
and its associated ruleset in a single file that is easy to share. Scenario suite archives can be
exported from Decision Center and imported into Rule Designer, for execution and debugging

Get Flexible Decision Automation for Your zEnterprise with Business Rules and Events now with the O’Reilly learning platform.