Frequently Asked Questions on IFRS by

Get full access to Frequently Asked Questions on IFRS and 60K+ other titles, with free 10-day trial of O'Reilly.

What is the Role of the International Accounting Standards Board (IASB)?

What exactly does the IASB do and what are its objectives?

The IASB was previously known as the International Accounting Standards Committee (IASC) until April 2001, when it became the IASB.

The IASC was originally set up in 1973 and was the sole body to have both responsibility and authority to issue international accounting standards. In 2001, when the IASB took over responsibility for international financial reporting, it took on all of the IASC's standards (which were all prefixed with ‘IAS’ – e.g. IAS 2 Inventories, IAS 10 Events After the Reporting Period). The IASB amended many of the standards, but then began to issue its own standards, which were known as International Financial Reporting Standards (IFRS). This is why you see standards prefixed with IAS (IASC standards) and IFRS (IASB standards). The term ‘IFRS’ has become a somewhat generic term that refers to all the standards (both IAS and IFRS).

The setup of the IASB is as follows: 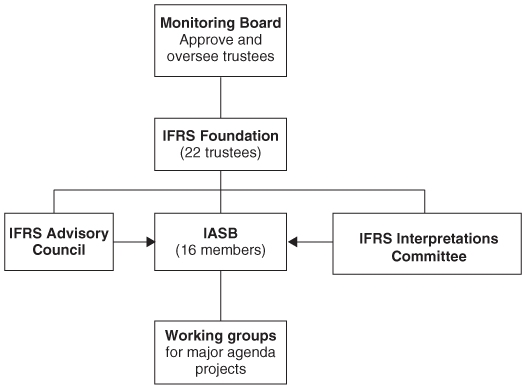 The Monitoring Board has been subject to criticism over the years because of its lack of accountability and lack of responsiveness to the concerns of its constituent members. However, the responsibilities of the monitoring board are to oversee the IFRS Foundation trustees, participate in the trustee nomination process and approve appointments ...

Get Frequently Asked Questions on IFRS now with the O’Reilly learning platform.