Get full access to Head First Software Development and 60K+ other titles, with free 10-day trial of O'Reilly. 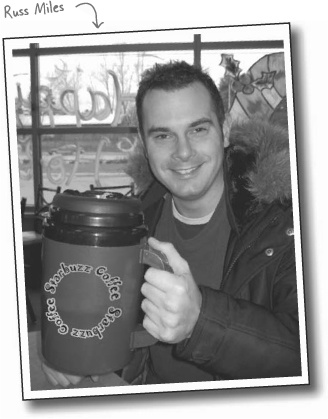 Russ is totally indebted to his fiancè, Corinne, for her complete love and support while writing this book. Oh, and he still can’t believe she said yes to getting married next year, but I guess some guys have all the luck!

Russ has been writing for a long time and gets a huge kick out of demystifying technologies, tools, and techniques that shouldn’t have been so mystified in the first place. After being a developer at various ranks for many years, Russ now keeps his days (and sometimes nights) busy by heading up a team of software developers working on super secret services for the music industry. He’s also just finished up his Oxford Masters degree that only took him five years. He’s looking forward to a bit of rest...but not for too long.

Russ is an avid guitar player and is relishing the spare time to get back to his guitars. The only thing he’s missing is Head First Guitar...c’mon Brett, you know you want that one! 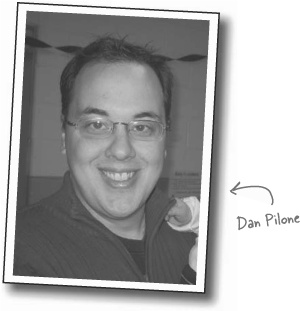 Dan is eternally grateful to his wife Tracey for letting him finish this book. Dan is a software architect for Vangent, Inc., and has led teams for the Naval Research Laboratory and NASA, building enterprise software. He’s taught graduate and undergraduate Software Engineering at Catholic University in Washington, D.C. Some of his classes were interesting.

Dan started writing for O’Reilly by submitting a proposal for this book a little over five years ago. Three UML books, some quality time in Boulder, Colorado, with the O’Reilly Head First team, and a co-author later, he finally got a chance to put this book together.

While leading a team of software developers can be challenging, Dan is waiting patiently for someone to write Head First Parenting to help sort out seriously complex management problems.