How to Read a Financial Report: Wringing Vital Signs Out of the Numbers, 8th Edition by

Get full access to How to Read a Financial Report: Wringing Vital Signs Out of the Numbers, 8th Edition and 60K+ other titles, with free 10-day trial of O'Reilly.

ACCRUING THE LIABILITY FOR UNPAID EXPENSES

Please refer to Exhibit 11.1 at the start of the chapter, which highlights the connections between selling, general, and administrative expenses in the income statement and the accrued expenses payable liability in the balance sheet, and between interest expense in the income statement and the same liability in the balance sheet. You get two for the price of one in this chapter. Both connections are based on the same idea—unpaid expenses at year-end are recorded so that the full, correct amount of expense is recognized in measuring profit for the year. 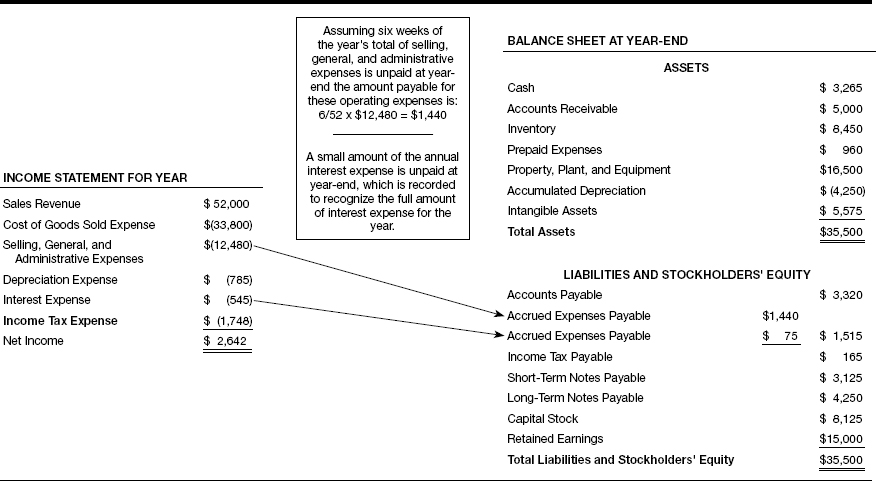 Chapter 8 explains that a business records certain expenses as soon as the bills (invoices) are received for these operating costs, even though it doesn’t pay the bills until weeks later. This chapter explains that a business has to go looking for certain unpaid expenses at the end of the period. No bills or invoices are received for these expenses; they build up, or accrue, over time.

For instance, the business in our example pays its salespersons commissions based on their individual sales each month. Commissions are calculated at the end of each month, but are not paid until the following month. At year-end, the sales commissions earned for the final month ...

Get How to Read a Financial Report: Wringing Vital Signs Out of the Numbers, 8th Edition now with the O’Reilly learning platform.