IFRS and XBRL: How to improve Business Reporting through Technology and Object Tracking by Kurt Ramin, Cornelis Reiman

Get full access to IFRS and XBRL: How to improve Business Reporting through Technology and Object Tracking and 60K+ other titles, with free 10-day trial of O'Reilly.

BESIDES IFRS THERE ARE MANY OTHER STANDARDS that have an important influence on business reporting. A selected portion of these standards are presented in this section, being those that have widespread usage. In particular:

It is noteworthy that the International Federation of Accountants (IFAC) plays a considerable role in relation to the accounting profession worldwide, as well as in relation to accounting standards for the private and public sectors. See www.ifac.org (Figure 2.1). 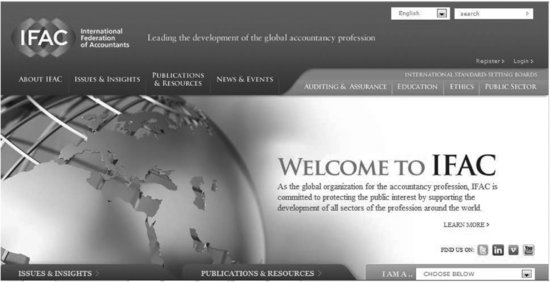 Note that this screenshot and the following text is an extract from the website of the International Federation of Accountants (IFAC) and is used with permission of IFAC.

As per the related organisation overview, IFAC's mission is to serve the public interest by: contributing to the development, adoption and implementation ...

Get IFRS and XBRL: How to improve Business Reporting through Technology and Object Tracking now with the O’Reilly learning platform.