23
3
Image Transforms
3.1 Introduction
According to the Merriam-Webster dictionary, transform in its broadest sense
means “change in the external form or in the inner nature.” Continuing,
mathematical transform means: “to change to a different form having the
same value.” In this chapter, we are focusing on the image transforms.
Usually, an image is represented as a function of two spatial variables
xy(,)
and represented as
fxy(,)
. The intensity at a particular point in an image is
the value taken by the function
fxy(,)
at that spatial location. This domain
of representation is most common for image storage and display. Since an
image is a representation in space through spatial coordinates, domain is
termed as the spatial domain. The term image transform refers to the math-
ematical process of converting and representing an image into its alternative
form. For example, an image can be represented as a series summation of
sinusoids with varying degree of magnitude and frequencies by the cosine
transform. This alternative representation of an image is known as frequency
domain. A typical transformation process between spatial and frequency
domain is shown in Figure3.1.
From Figure3.1, it should be noted that the conversion from the spatial to
the frequency domain is known as a forward transform and the other way
around is known as an inverse transform. As noted in the denition earlier,
these transforms should be lossless, meaning that the information content of
the signal should not be altered or lost due to the process of transformation.
An important question that must be pondered upon is: Why do we need
these transforms when the information content should not change? These
transforms help in visualizing the same information content but from a dif-
ferent perspective. It is useful to visualize certain feature(s) of a signal in
transform domain when they are not visible in the parent domain. For exam-
ple, information about the frequency content of the signal is available only in
the frequency domain and not in its time domain visualization. In another
reasoning, certain image processing operations can be best realized by trans-
forming the signal, carrying out the desired operation, and returning to the
parent domain. The general principle in applying the transform is depicted 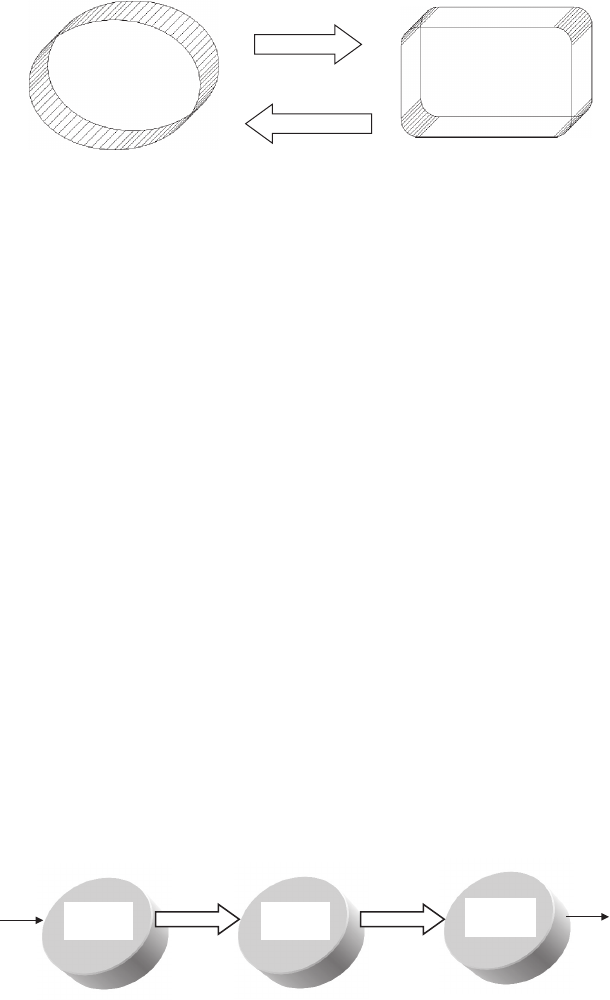 24 Image and Video Compression
in Figure3.2. Thus, input image is transformed from spatial domain to the
frequency domain. In that domain the desired operation is carried out and
then inverse transform is applied to go back to the spatial domain.
Image transform is useful in many applications and can be used for a
range of purposes. Some of the important applications are as follows:
Image enhancement—Transform can be used to exploit limitations of the
human visual system and improve perceptual quality and computa-
tional efciency of the image.
Filtering—Transform can help in isolating certain components of inter-
est in an image or can help to remove spurious noise components
from the band of interest.
Image compression—Image transform helps in de-correlating the data,
preserving the principal components of a signal, and quantizing
other components to obtain the signal compression.
Pattern recognition—Image transform captures many features like
edges, corners, and statistical moments to identify objects and/or to
classify them.
Convolution—It is a computationally expensive operation in time or
spatial domain, which in the frequency (transform) domain reduces
to a multiplication operation by using an image transform.
Forward
Transform
Desired
Operation
Inverse
Transform
Spatial
Domain
Spatial
Domain
Freq.Freq.
Domain Domain
FIGURE 3.2
The general principle in carrying out a specic operation in the transform domain.
Image in
spatial domain
Image in
frequency
domain
Forward
Transform
Inverse
Transform
FIGURE 3.1
A transformation in between the spatial and frequency domain.