Infographics: The Power of Visual Storytelling by

Get full access to Infographics: The Power of Visual Storytelling and 60K+ other titles, with free 10-day trial of O'Reilly.

We can assume a format-agnostic approach for now, and focus on illustrating the concept above (Figure 3.1). To better understand this concept, let’s think of the Who as being the label for the x-axis, and the What as being represented along the y-axis. 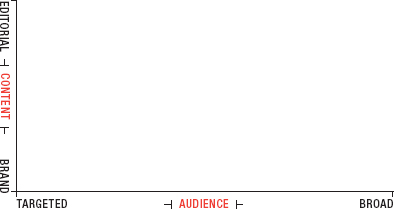 The quality of an application of infographics is largely measured by how it is leveraged to reach its specific objectives. Simply, popularity—or broad reach—should not be misinterpreted as a litmus test for quality, as reaching a large audience is not always the goal. For instance, if you are creating an internal (brand-centric) report for shareholders, it likely will not be interesting to an audience larger than who it was intended for: the shareholders. However, if someone is trying to create a really fun editorial piece, that they think will have broad appeal, but in the end it falls on deaf ears, then that my friend is a failure.

You should also think of each application along the visual storytelling spectrum as occupying a territory or range, rather than as a single point. And for each brand, these ranges will have different levels of overlap. For instance, ...

Get Infographics: The Power of Visual Storytelling now with the O’Reilly learning platform.