Get full access to Introducing Maya® 2008 and 60K+ other titles, with free 10-day trial of O'Reilly. 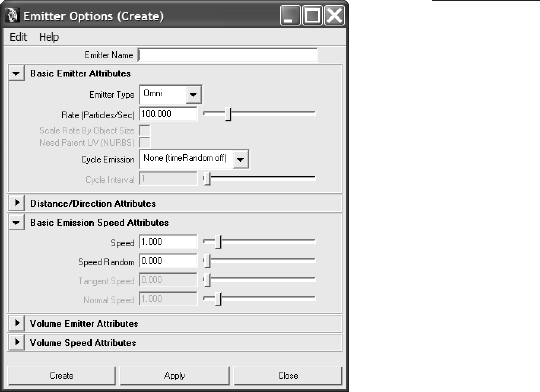 With this methodology, you could bake out the animation of any simulation, from
dynamics (as we just did) to constraints and some scripts. The curve simplification works
with good old-fashioned keyframed curves as well, so if you inherit a scene from another
animator and need to simplify the curves, do it just as we did here.
Particle Dynamics
Like rigid body objects, particles are moved dynamically using collisions and fields. In
short, a particle is a point in space that is given renderable properties; that is, it can render
out. When particles are used en masse, they can create effects such as smoke, a swarm of
insects, fireworks, and so on. Although particles can be an advanced and involved aspect
of Maya, it is important to have some exposure to them as you begin to learn Maya.
Much of what you learned about rigid body dynamics transfers to particles. However, it
is important to think of particle animation as manipulating a larger system rather than as
controlling every single particle in the simulation. You control fields and dynamic attrib-
utes to govern the motion of the system as a whole.
For example, with the pool table you control the motion of the cue ball and let Maya
dynamics calculate the motion of the other balls after they collide. Each ball is a distinct
part of the scene and renders out as a distinct object in the frame. Particles are most often
used together in large numbers so that the entirety is rendered out to create an effect. To
control a particle system, you’ll create an emitter and define fields and attributes that con-
trol the particles’ movement.
Figure 12.15
Creation options for
a Particle emitter
Emitting Particles
Typical work flow for creating a particle
effect in Maya breaks into two parts: motion
and rendering. First, you create and define
the behavior of particles through emission.
An emitter is a Maya object that creates the
particles themselves. After creating fields
and adjusting particle behavior within a
dynamic simulation, much as you would do
with rigid body motion, you give the parti-
cles renderable qualities to define how they
look. This second aspect of the workflow
defines how the particles “come together” to
create the desired effect, such as steam. You
will make a steaming locomotive pump later
in this chapter.
emitting particles ■ 533
83564c12.qxd 10/23/07 2:20 PM Page 533 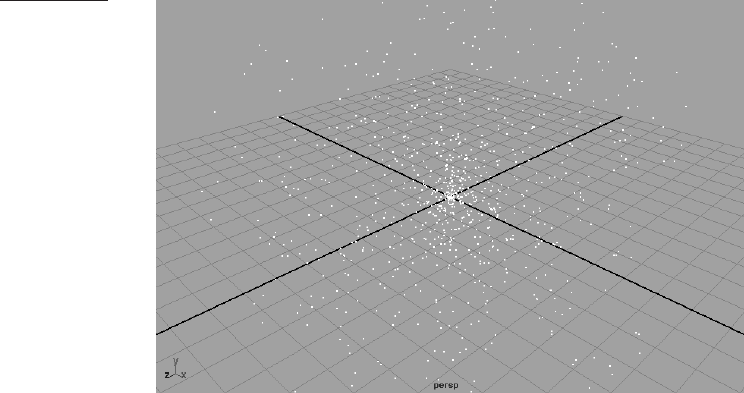 To create a particle system, follow these steps:
1. Make sure you are in the Dynamics menu, and then choose Particles
➔
Create
Emitter
➔
❒. The Option box gives you various creation options for the Particle emit-
ter, as shown in Figure 12.15.
The default settings will create an Omni emitter with a rate of 100 particles per sec-
ond and a speed of 1.0. Click Create. A small round object (the emitter) will appear
at the origin.
2. Click the Play button to play the scene. As with rigid body dynamics, you must also
play back the scene using the Play Every Frame option. You cannot scrub or reverse
play particles unless you create a cache file. You will learn how to create a particle disk
cache later in this chapter. But for the most part, particles need to be played back to
run properly.
You will notice a mass of small dots stream out of the emitter in all directions (see Fig-
ure 12.16). These are the particles themselves.
Emitter Attributes
You can control how particles are created and behave by changing the type of emitter and
adjusting its attributes:
Omni Emits particles in all directions.
Directional Emits a spray of particles in a specific direction, as shown in Figure 12.17.
Figure 12.16
An Omni emitter
emits a swarm of
little particles in all
directions.
534 ■ chapter 12: Maya Dynamics
83564c12.qxd 10/23/07 2:20 PM Page 534 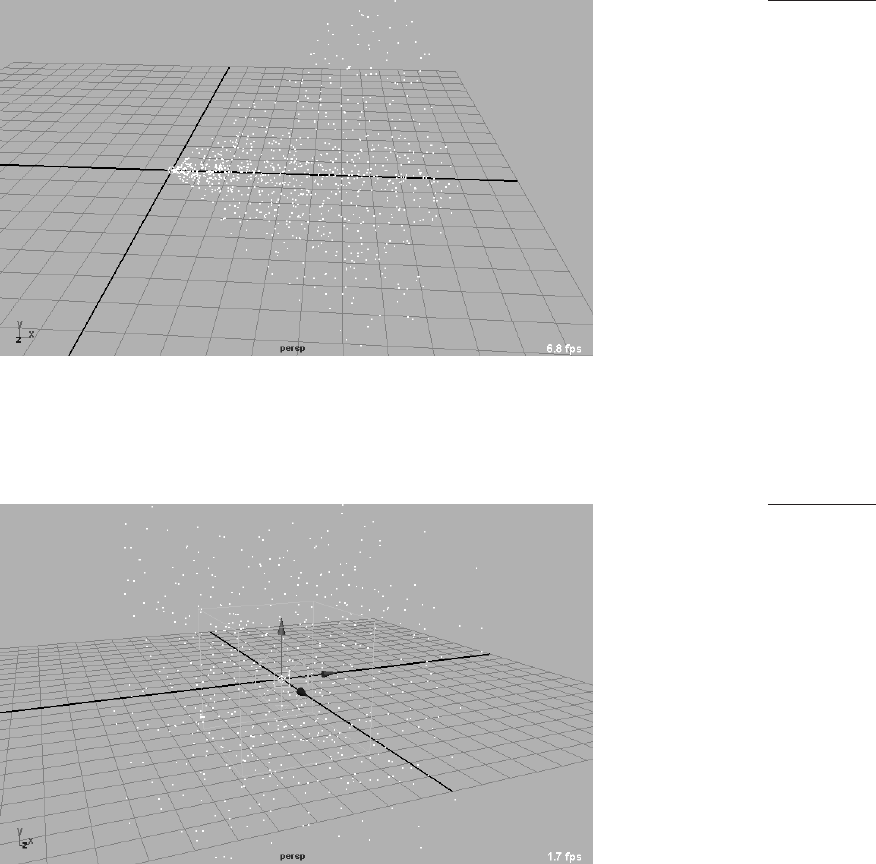 Volume Emits particles from within a specified volume, as in Figure 12.18. The volume
can be a cube, a sphere, a cylinder, a cone, or a torus. By default, the particles can leave the
perimeter of the volume.
After you create an emitter, its attributes govern how the particles are released into the
scene. Every emitter has the following attributes to control the emission:
Rate Governs how many particles are emitted per second.
Speed Specifies how fast the particles move out from the emitter.
Figure 12.18
Particles emit from
anywhere inside the
emitter’s volume.
Figure 12.17
Particles sprayed in
a specific direction
emitting particles ■ 535
83564c12.qxd 10/23/07 2:20 PM Page 535

Get Introducing Maya® 2008 now with the O’Reilly learning platform.