Get full access to Introduction to the New Mainframe: Large-Scale Commercial Computing and 60K+ other titles, with free 10-day trial of O'Reilly.

Start your free trial
40 Introduction to the New Mainframe: Large-Scale Commercial Computing
A more detailed discussion on what scalability means and why it is important can
be found in the paper entitled “Scaling—Up and Out”, which is available at the
following site:
http://www.redbooks.ibm.com/abstracts/redp0436.html
The workload management function is a software piece that plays an important
role in the management of these different workload types, and thus on the
scalability of a system.
3.2.2 Scalability influences
Scalability refers to the ability of a system to provide nondisruptive growth path in
order to handle the projected explosion in computing demand. Scalability
includes not only processor power, but also processor memory, I/O bandwidth,
the ability to attach to large number of peripherals, the ability of the software to
exploit large systems and the ability to manage a large system.
Almost all platforms today are positioned as scalable systems. The IBM System z
server family has the proven capability to support tens of thousands of users,
while processing hundreds or even thousands of transactions per second.
There are two broad approaches to processor scalability—vertical and horizontal
growth. These are explained in more detail here.
Vertical growth
Vertical growth is the ability to upgrade the installed server processor capacity to
a larger one within the same family, for example, by adding further processor
engines to a Symmetric Multiprocessor (SMP).
The IBM System z multiprocessing design is a mature technology with decades
of expertise behind it. In order to reduce interprocessor interference, IBM has
improved both the hardware design and the software algorithms of the operating
systems that support the IBM System z. This means that there is a greater
scalability in model upgrades for IBM System z than for other platforms. This
design also means that the IBM System z family of processors offers clear,
simple upgrade paths between models.
Horizontal growth through Parallel Sysplex
Horizontal growth is the ability to add processor capacity by adding more servers
in a cluster. The IBM System z unique Parallel Sysplex share-all, clustering
technology offers near-linear scalability and a capacity far exceeding any single
commercial workload, by allowing you to connect up to 32 IBM System z servers
and to operate and manage them as a single image. 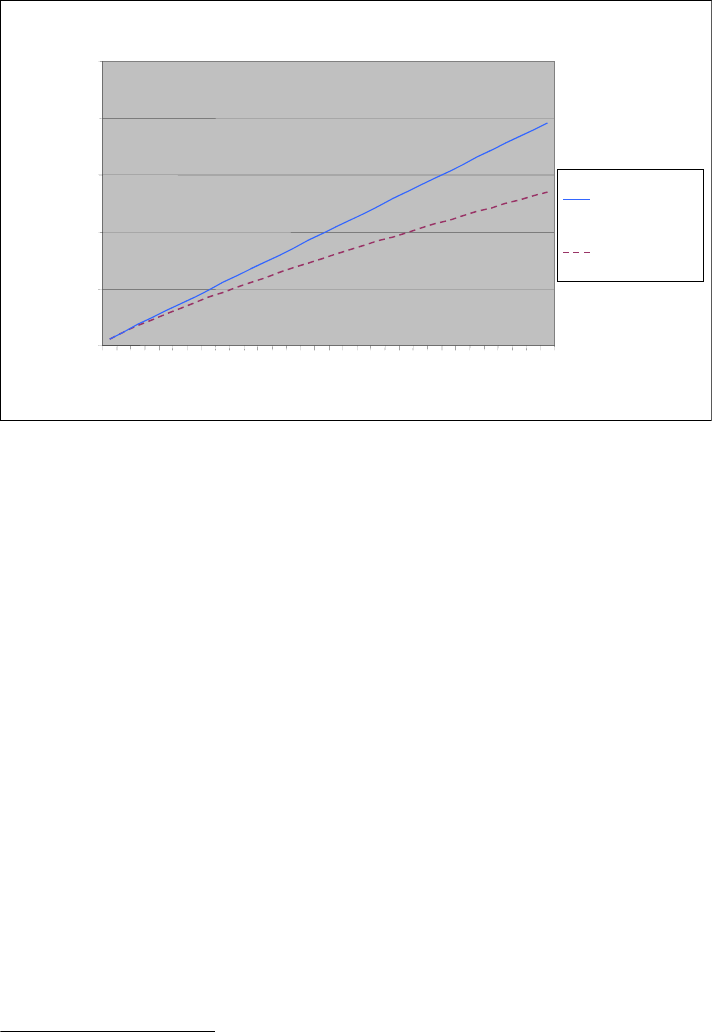 Chapter 3. Scalability 41
Figure 3-1 Linear growth compared to Sublinear Performance
Figure 3-1 shows linear growth compared to sublinear performance. The
performance number is based on real-world test results. Nways® represents the
number of processors. By “sublinear” we mean that the real (measured)
performance growth is less than one would expect from drawing a straight line
that is defined by the first two measurement points (in mathematics, sublinear
means “less than linear”
4
).
In Figure 3-1 that line is also shown, so the nth CP of a Parallel Sysplex adds
less computing power to the system than the one before (n-1). In a linear growth
(top line), all CP would add the same amount of computing power.
Clusters, or scale out systems, replicate complete systems interconnected via a
variety of interconnect mechanisms. In scale out systems, the performance and
scalability are limited by both the speed and efficiency of the intra-node
communication and by the effectiveness of the sharing scheme implemented at
the software level.
There are many clustering schemes, depending on the machine type used. The
IBM System z cluster technology is called Parallel Sysplex, and is described in
detail Chapter 5, “Availability” on page 87.
4
From Wikipedia Encyclopedia http://en.wikipedia.org/wiki/Sublinear
IBM System z
0
5000
10000
15000
20000
25000
0
5000
10000
15000
20000
25000
1
3
5
7
9
11
13
15
17
19
21
23
25
27
29
31
Nways
Relative Performance
Sublinear
Performance
Sublinear
Performance
Linear
growth

Get Introduction to the New Mainframe: Large-Scale Commercial Computing now with the O’Reilly learning platform.