Get full access to iPhone: The Missing Manual, 10th Edition and 60K+ other titles, with free 10-day trial of O'Reilly.

How do you make the point that the iPhone has changed the world? The easy answer is “use statistics”—1 billion sold, 2 million apps available on the iPhone App Store, 140 billion downloads.... Trouble is, those statistics get stale almost before you’ve finished typing them.

Maybe it’s better to talk about the aftermath. How since the iPhone came along, cell carriers (AT&T, Verizon, Sprint, and so on) have opened up the calcified, conservative way they used to consider new cellphone designs. How every phone and its brother now have a touchscreen. How Google (Android) phones, Windows phones, and even BlackBerry phones all have their own app stores. How, in essence, everybody wants to be the iPhone.

Apple introduces a new iPhone model every fall. In September 2016, for example, it introduced the tenth iPhone models, the iPhone 7 and 7 Plus, with more features and faster guts.

More importantly, there’s a new, free version of the iPhone’s software, called iOS 10. (Why not “iPhone OS” anymore? Because the same operating system runs on the iPad and the iPod Touch. It’s not just for iPhones, and saying “the iPhone/iPad/iPod Touch OS” takes too long.)

So what is the iPhone? Really, the better question is what isn’t the iPhone?

It’s a cellphone, obviously. But it’s also a full-blown iPod, complete with a dazzling screen for watching videos. And it’s a sensational pocket Internet viewer. It shows fully formatted email (with attachments, thank you) and displays entire web pages with fonts and design intact. It’s tricked out with a tilt sensor, a proximity sensor, a light sensor, Wi-Fi, Bluetooth, GPS, a gyroscope, a barometer, and that amazing multitouch screen. 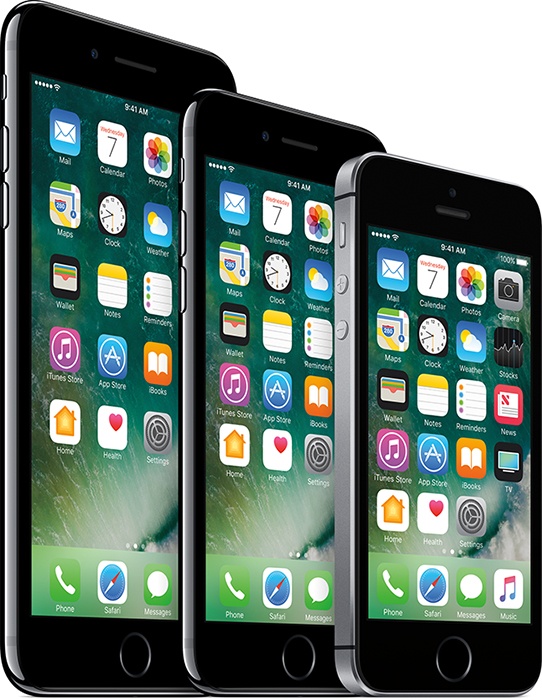 For many people, the iPhone is primarily a camera and a camcorder—one that’s getting better with every year’s new model.

Furthermore, it’s a calendar, address book, calculator, alarm clock, stopwatch, stock tracker, traffic reporter, RSS reader, and weather forecaster. It even stands in for a flashlight and, with the screen off, a pocket mirror.

If you want a really good pocket mirror, you can also use the Camera app in self-portrait mode. It’s a brighter view (and you don’t have to actually take a selfie).

And don’t forget the App Store. Thanks to the 2 million add-on programs that await there, the iPhone is also a fast, wicked-fun pocket computer. All those free or cheap programs can turn it into a medical reference, a musical keyboard, a time tracker, a remote control, a sleep monitor, a tip calculator, an ebook reader, and more. Plus, the App Store is a portal to thousands of games, with smooth 3D graphics and tilt control.

All of this sends the iPhone’s utility and power through the roof. Calling it a phone is practically an insult. (Apple probably should have called it an “iPod,” but that name was taken.)

You don’t get a printed manual when you buy an iPhone. Online, you can find an electronic PDF manual that covers the basics well, but it’s largely free of details, hacks, workarounds, tutorials, humor, and any acknowledgment of the iPhone’s flaws. You can’t easily mark your place, underline, or read it in the bathroom.

Writing a book about the iPhone is a study in exasperation, because the darned thing is a moving target. Apple updates the iPhone’s software fairly often, piping in new features, bug fixes, speed-ups, and so on.

Therefore, you should think of this book the way you think of the first iPhone: as an excellent start. To keep in touch with updates we make to it as developments unfold, drop in to the book’s Errata/Changes page. (Go to www.missingmanuals.com, click this book’s name, and then click View/Submit Errata.)

iPhone: The Missing Manual is divided into five parts, each containing several chapters:

Throughout this book, and throughout the Missing Manual series, you’ll find sentences like this one: Tap Settings→General→Keyboard. That’s shorthand for a much longer instruction that directs you to open three nested screens in sequence, like this: “Tap the Settings icon. On the next screen, tap General. On the screen after that, tap Keyboard.” (In this book, tappable things on the screen are printed in orange to make them stand out.)

Similarly, this kind of arrow shorthand helps to simplify the business of choosing commands in menus on your Mac or PC, like File→Print.

Missing Manuals are witty, well-written guides to computer products that don’t come with printed manuals (which is just about all of them). Each book features a handcrafted index; cross-references to specific page numbers (not just “see Chapter 15”); and an ironclad promise never to put an apostrophe in the possessive pronoun its.

To get the most out of this book, visit www.missingmanuals.com. Click the Missing CDs link, and then click this book’s title to reveal a neat, organized list of the shareware, freeware, and bonus articles mentioned in this book.

The website also offers corrections and updates to the book; to see them, click the book’s title, and then click View/Submit Errata. In fact, please submit corrections yourself! Each time we print more copies of this book, we’ll make any confirmed corrections you’ve suggested. We’ll also note such changes on the website, so you can mark important corrections into your own copy of the book, if you like. And we’ll keep the book current as Apple releases more iPhone updates.

Apple’s usual routine is to introduce a new iPhone shape every other year (iPhone 3G, iPhone 4, iPhone 5, iPhone 6)—and then release a follow-up, upgraded “s” model in alternate years (iPhone 3GS, iPhone 4s, iPhone 5s, iPhone 6s). The 2016–2017 models fit right in. They’re follow-up models that look exactly like the 6 and 6s but have a few enhancements:

The design for iOS 10 doesn’t look much different from iOS 9 before it (or iOS 8, or iOS 7); the improvements are focused on features and flexibility.

If the fonts are too thin for your taste, you can fatten them up just enough by going to Settings→Display & Brightness and turning on Bold Text. While you’re there, you can make text larger in most apps, too; tap the Text Size control.

You’d have to write an entire book to document everything that’s new or changed in iOS 10; it’s a huge upgrade. But here’s a quick rundown.

First, there’s been a colossal revamp of Messages, Apple’s text-messaging app. Now you can dress up your messages with a wide range of hilarious new visual treats, animations, and effects, inspired by the ones in, for example, Snapchat and Facebook Messenger.

Second, Apple has rethought that moment when you pick up the phone—a hundred times a day. The iPhone now requires fewer steps to unlock itself, check the latest alerts, or fire up the camera.

A new option in Settings called “Raise to Wake” (available in the 6S, 7, and SE families) makes the screen turn on when you just pick up the phone.

What It All Means

Let’s be honest: Apple is finding it harder to say “no” to new features these days. iOS has become a very dense operating system, with more features than you could master in years.

Then again, the public may not care about simplicity the way it once did. When smartphones were new, extreme simplicity was critical to helping them accept the concept.

Today’s 10-year-olds weren’t even alive before there were iPhones. And people who got their first smartphones as teenagers grew up along with iOS and Android—and evolved along with them—so the sheer complexity doesn’t bother them much. It’s usually only their parents who complain.

But never mind. iOS 10 is better, smarter, faster, clearer, and more refined than what came before. It takes hundreds of steps forward, and only a couple of tiny steps back.

That’s a lot of tweaks, polishing, and finesse—and a lot to learn. Fortunately, 650 pages of instructions now await you.

Get iPhone: The Missing Manual, 10th Edition now with the O’Reilly learning platform.