A component represents a graphical entity of one kind or another that can be displayed on the screen. A component is any object of a class that is a subclass of Component. As you have seen, a JFrame window is a component, but there are many others. Before getting into specifics, let's first get a feel for the general relationship between the groups of classes that represent components. Part of the class hierarchy with Component as a base is shown in Figure 17-6. The arrows in the diagram point toward the superclass. 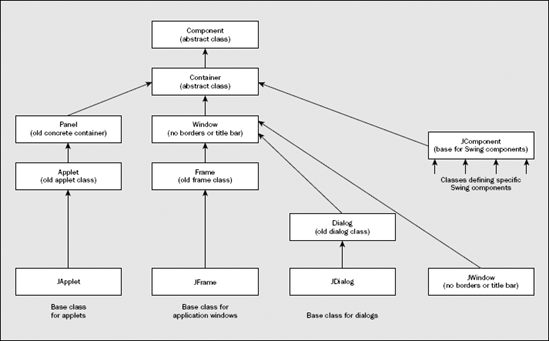 This shows some of the subclasses of Component—the ones that are important to you at the moment. I discussed the chain through to JFrame earlier, but the other branches are new. The classes that you'll be using directly are all the most commonly derived classes.

Let's summarize how you would typically use the key classes in this hierarchy: