Event handling in an applet is exactly the same as in an application, but you ought to see it for yourself. Let's see how you might handle events for buttons in an applet. You can create an applet that uses some buttons that have listeners. To make this example a bit more gripping, I'll throw in the possibility of monetary gain. That's interesting to almost everybody.

Let's suppose you want to implement an applet that will create a set of random numbers for a lottery entry. The requirement is to generate six different random numbers between 1 and 49. It would also be nice to be able to change a single number if you don't like it, so you'll add that capability as well. Since the local lottery may not be like this, you'll implement the applet to make it easily adaptable to fit local requirements.

By displaying the six selected numbers on buttons, you can provide for changing one of the choices by processing the action event for that button. Thus, clicking a button will provide another number. You'll also add a couple of control buttons, one to make a new selection for a complete set of lottery numbers, and another just for fun to change the button color. Figure 18-5 shows how the applet will look when running under appletviewer: 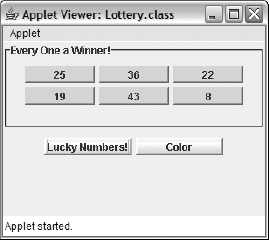