Juniper Networks prides itself on creating custom silicon and making history with silicon firsts. Trio is the latest milestone:

Trio is a fundamental technology asset for Juniper that combines three major components: bandwidth scale, services scale, and subscriber scale. Trio was designed from the ground up to support high-density, line-rate 10G and 100G ports. Inline services such as IPFLOW, NAT, GRE, and BFD offer a higher level of quality of experience without requiring an additional services card. Trio offers massive subscriber scale in terms of logical interfaces, IPv4 and IPv6 routes, and hierarchical queuing.

Trio is built upon a Network Instruction Set Processor (NISP). The key differentiator is that Trio has the performance of a traditional ASIC, but the flexibility of a field-programmable gate array (FPGA) by allowing the installation of new features via software. Here is just an example of the inline services available with the Trio chipset: 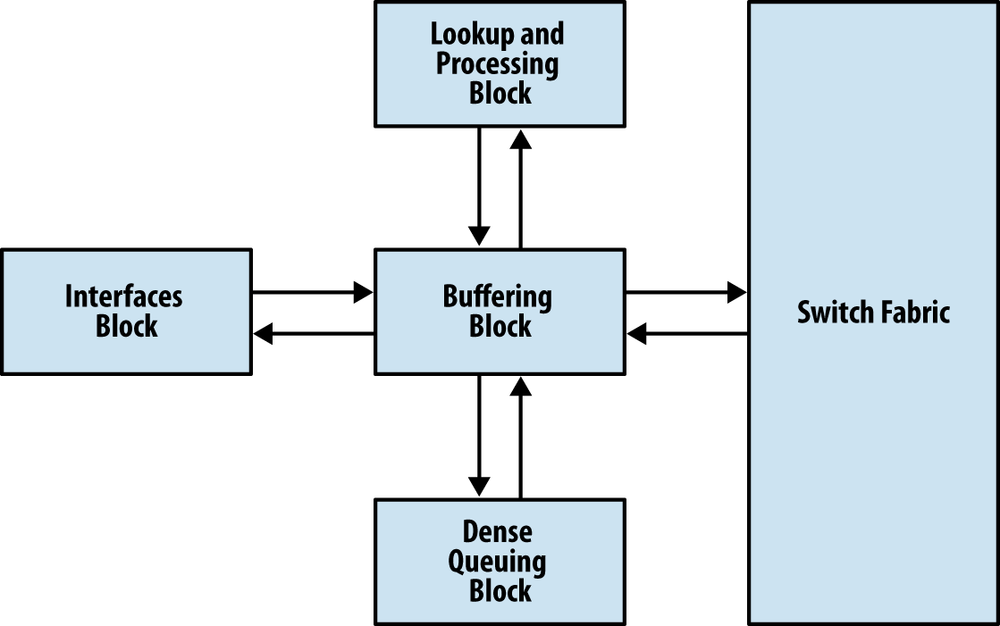 Each function is separated into its own block so that each function is highly optimized and cost efficient. Depending on the size and scale required, Trio is able to take these building blocks and create line cards that offer specialization such as hierarchical queuing or intelligent oversubscription.

The Buffering Block ties together all of the other functional Trio blocks. It primarily manages packet data, fabric queuing, and revenue port queuing. The interesting thing to note about the Buffering Block is that it’s possible to delegate responsibilities to other functional Trio blocks. As of the writing of this book, there are two primary use cases for delegating responsibility: process oversubscription and revenue port queuing.

In the scenario where the number of revenue ports on a single MIC is less than 24x1GE or 2x10GE, it’s possible to move the handling of oversubscription to the Interfaces Block. This opens doors to creating oversubscribed line cards at an attractive price point that are able to handle oversubscription intelligently by allowing control plane and voice data to be processed during congestion.

The Buffering Block is able to process basic per port queuing. Each port has eight hardware queues, large delay buffers, and low latency queues (LLQs). If there’s a requirement to have hierarchical class of service (H-QoS) and additional scale, this functionality can be delegated to the Dense Queuing Block.

The Lookup Block has multi-core processors to support parallel tasks using multiple threads. This is the bread and butter of Trio. The Lookup Block supports all of the packet header processing such as:

A key feature in the Lookup Block is that it supports Deep Packet Inspection (DPI) and is able to look over 256 bytes into the packet. This creates interesting features such as Distributed Denial of Service (DDoS) protection, which is covered in Chapter 4.

In order to process data at line rate, the Lookup Block has a large bucket of reduced-latency dynamic random access memory (RLDRAM) that is essential for packet processing.

Let’s take a quick peek at the current memory utilization in the Lookup Block.

The external data memory (EDMEM) is responsible for storing all of the firewall filters, counters, next-hops, encapsulations, and hash data. These values may look small, but don’t be fooled. In our lab, we have an MPLS topology with over 2,000 L3VPNs including BGP route reflection. Within each VRF there is a firewall filter applied with two terms. As you can see, the firewall memory is barely being used. These memory allocations aren’t static and are allocated as needed. There is a large pool of memory and each EDMEM attribute can grow as needed.

As new MICs are released, they may or may not have an Interfaces Block depending on power requirements and other factors. Remember that the Trio function blocks are like building blocks and some blocks aren’t required to operate.

Each packet is inspected at line rate, and attributes such as Ethernet Type Codes, Protocol, and other Layer 4 information are used to evaluate which buffers to enqueue the packet towards the Buffering Block. Preclassification allows the ability to drop excess packets as close to the source as possible, while allowing critical control plane packets through to the Buffering Block.

There are four queues between the Interfaces and Buffering Block: real-time, control traffic, best effort, and packet drop. Currently, these queues and preclassifications are not user configurable; however, it’s possible to take a peek at them.

Let’s take a look at a router with a 20x1GE MIC that has an Interfaces Block.

We can see that FPC1 supports two 20x1GE MICs. Let’s take a peek at the preclassification on FPC1.

Each physical port is broken out and grouped by traffic class. The number of packets dropped is maintained in a counter on the last column. This is always a good place to look if the router is oversubscribed and dropping packets.

Let’s take a peek at a router with a 4x10GE MIC that doesn’t have an Interfaces Block.

Here we can see that FPC2 has two 4x10GE MICs. Let’s take a closer look and the preclassification engines.

The author has used hidden commands to illustrate the roles and responsibilities of the Interfaces Block. Caution should be used when using these commands as they aren’t supported by Juniper.

The Buffering Block’s WAN interface can operate either in MAC mode or in the Universal Packet over HSL2 (UPOH) mode. This creates a difference in operation between the MPC1 and MPC2 line cards. The MPC1 only has a single Trio chipset, thus only MICs that can operate in MAC mode are compatible with this line card. On the other hand, the MPC2 has two Trio chipsets. Each MIC on the MPC2 is able to operate in either mode, thus compatible with more MICs. This will be explained in more detail later in the chapter.

Depending on the line card, Trio offers an optional Dense Queuing Block that offers rich Hierarchical QoS that supports up to 512,000 queues with the current generation of hardware. This allows for the creation of schedulers that define drop characteristics, transmission rate, and buffering that can be controlled separately and applied at multiple levels of hierarchy.