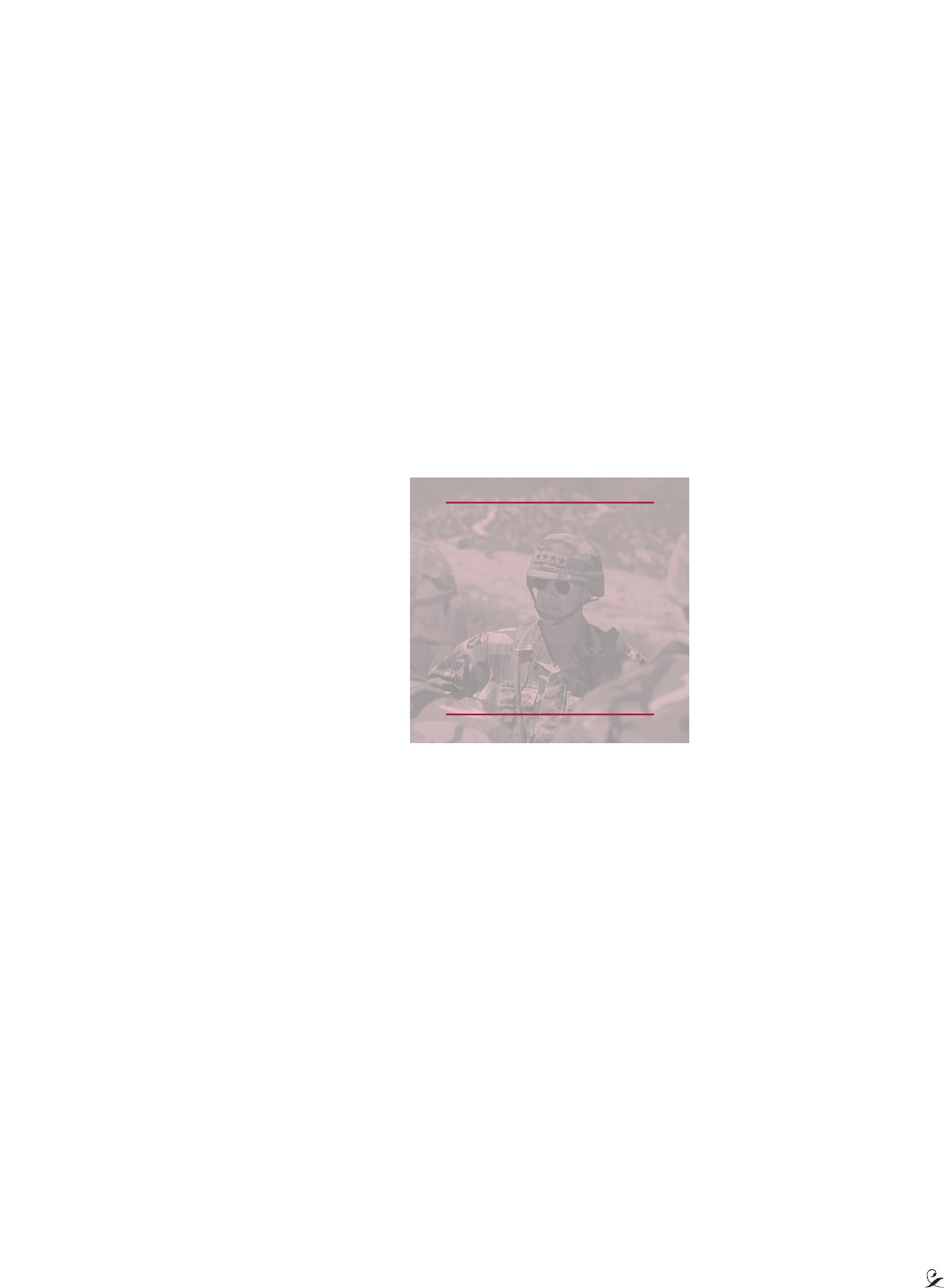 Military Academy—I speak from
experience. During my five tours as a
unit commander I found that this
approach not only works but works
well.
In Desert Storm and Desert
Shield, I commanded a unit of six
hundred paratroopers (including
seventy-two women) known as the
Nighthawks. These soldiers knew that
their basic physiological needs would
be met, that expectations would be
clearly and constantly communicated,
that standards of conduct and disci-
pline would be enforced, and that
they were trained and prepared to
perform their mission. Morale
remained high throughout the nine-
month deployment as the Nighthawks
successfully performed all their
assigned tasks. All six hundred sol-
diers returned home safely.
The Gulf War experience validated
for the Army’s leadership a key les-
son—that soldiers, as human beings,
have a basic need to be accepted and
treated with respect, trust, and dig-
nity. If an organization treats individ-
uals in this way, then the individuals
will accept and take ownership of the
organization’s vision, values, and
imperatives. If this basic need is not
met, then it’s questionable whether
people will sign on to the other ele-
ments of the organizational culture.
The Army has adopted this principle
as critical to its combat effectiveness
and even its very survival.
HUMAN NEEDS
In 1954, psychologist Abraham
Maslow published his extensive
research on human needs—work now
known as the hierarchy of needs.
Maslow’s thesis is that humans have
five levels of need. As one level of
need is met, the individual works
toward meeting the next most impor-
tant level. The foundational level is
physiological needs, which include
such survival basics as air, water, and
food. The next level is safety and
security—reflecting the human desire
for protection and stability. Maslow
divided the third level, which
includes social needs, into two parts:
the need to belong to a group (affilia-
tion) and the need for acceptance,
caring, and affection.
Here is where I believe Maslow got
it wrong. My experience and disserta-
tion research indicate that what
Maslow saw as the third level of need
is in fact the level to which people give
the highest precedence. During the
Vietnam and Gulf wars, I saw soldiers
give up, at least temporarily, physio-
logical needs such as food, sleep, and
shelter in order to accomplish their
mission. I also saw them relinquish the
need for safety and security, willingly
putting themselves in harm’s way and
risking death in order to retain their
status in and acceptance by the group
to which they belonged.
So soldiers would pass over the
first two levels of need to meet the
third, social level of need. The worst
thing that could be said to a soldier
after a firefight was, “Where were
you when the chips were down?”
Soldiers depend on one another for
survival, and if a soldier doesn’t pull
his weight he jeopardizes the others
in his unit. Not only that, but the sol-
dier can be blackballed by the group,
thereby threatening his own survival.
In military situations, therefore, the
need for belonging to the group and
having its approval and respect takes
precedence over Maslow’s first two
levels of need.
This principle has been reinforced
by my experience at CCL. An
assessment instrument called
FIRO-B, used in most of CCL’s pro-
grams, employs a questionnaire on
which participants report their
expressed and wanted needs in three
categories: inclusion, control, and
affection. Participants routinely give
the highest scores to their desire for
open and honest relationships. This
indicates that people place the high-
est priority on emotional connection,
open and honest communication,
and close, strong relationships. It
also backs up my theory that the
strongest human need is the need for
group acceptance, affiliation, and
affection.
There is a simple yet profound
leadership lesson here. If leaders help
followers meet the need for affilia-
tion, acceptance, appreciation, valida-
tion, approval, respect, and under-
standing, there is a high probability
that the organization will achieve its
mission and its vision—even, or per-
haps especially, when the workforce
is changing.
THE BEDROCK OF SUCCESS
The Army’s handling of its changing
workforce in the post-Vietnam era
was guided by enlightened leader-
ship. The Army’s vision, values,
imperatives, personnel selection,
leadership development, and diver-
sity—all tied together by the new
appreciation for meeting basic human
social needs—provide a model for
civilian leaders that is filled with
practical principles. Despite all the
Army’s success, however, it has not
completed its work. Key issues—
such as recruiting and retention,
women in combat, sexual harassment,
and gays in the military—remain as
challenges. There is little doubt, how-
ever, that the Army’s evolution into
an organization whose leadership
treats individuals with respect, trust,
and dignity will be invaluable in
meeting those challenges.
LIA • VOLUME 21, NUMBER 3 • JULY/AUGUST 2001
11
The Army placed an
unwavering emphasis on
the human dimension
in all its transition
processes.