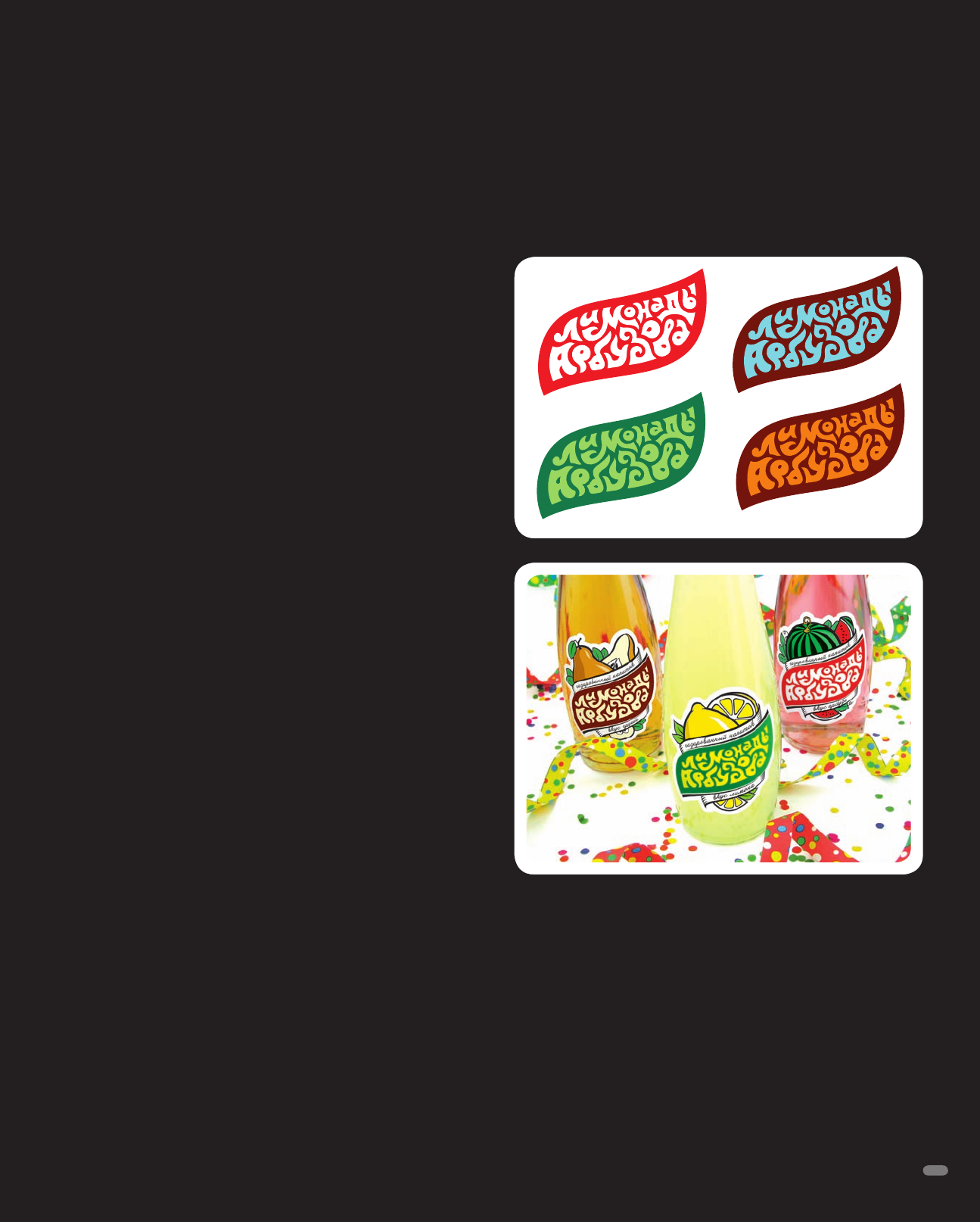 “An impudent design which is not a standard representation of
usual labels, in this case, for lemonade, has turned out well,”
Zheleznyakov says. “It is interesting for me to work on the project
because the client was not afraid to take risks. He was not afraid
to be unlike anybody else. Nonstandard and courageous deci-
sions seldom happen in life.”
Russian designer Yaroslav Zheleznyakov of Y-Design in the city of
Yaroslavl, Russia, explains that his client’s product—lemonade—
although ubiquitous in other parts of the world, is perhaps a bit
more out of the ordinary in his region.
“The client is engaged in the manufacture of lemonade in bottles
and will market it under the name ‘Lemonades from Arbuzov,’
so the trademark translates to “lemonades from watermelons,’”
Zheleznyakov says. “‘Watermelons’ are the invented surname
of the seller of the product. The name was amusing to the client
and me too.”
In Russia, consumers’ relationship to lemonade is different than
in other places. It is never something that children would sell at a
sidewalk stand, and almost never would anyone make it at home.
In addition, it is usually a carbonated drink sold only in shops or
cafeterias. Lemonade is regarded as a children’s drink, related to
holidays and nostalgia.
“But lemonade is considered to be a bit old-fashioned, purchased
now by people middle-aged and older,” Zheleznyakov says. The
designer wanted to ﬁ nd a way to refresh the concept of the drink
itself and make it more relevant to consumers today.
He decided to play off of the nostalgia component. Buyers in the
client’s target group not only thought back fondly on lemonade as
a happy childhood memory, but they would also have the same
feelings for the circus, which Zheleznyakov says was more popu-
lar than the movies at the time. So he started to experiment with
Cyrillic lettering that would be reminiscent of a circus poster of the
time. But he made the letterforms and colors very contemporary,
almost like grafﬁ ti.
Through many trials, he puzzled together letterforms into a leaf
shape. The result is as much an intricate illustration or illumination
as it is a trademark name. Its color is easily changed to reﬂ ect
the client’s various ﬂ avor offerings, and it sits nicely on the clear
bottles of drink.
The client was very happy with the design, the designer reports.
The packaging stands out among competitors’ products because
it is so unusual and contrary.
Lemonades from Arbuzov
Identity and Product Design
Y-Design, Yaroslavl, Russia
127
Russian designer Yaroslav Zheleznyakov wanted not only to give
the product a distinctive look with his new identity, but also to
refresh the way Russian’s viewed lemonade.
TEXT
Black
(Provision RP) Logo Lounge 5
D209-128 / 4228 1st proof1st proof
LL5 118-129_NC_.indd 127LL5 118-129_NC_.indd 127 2/25/09 8:52:35 PM2/25/09 8:52:35 PM