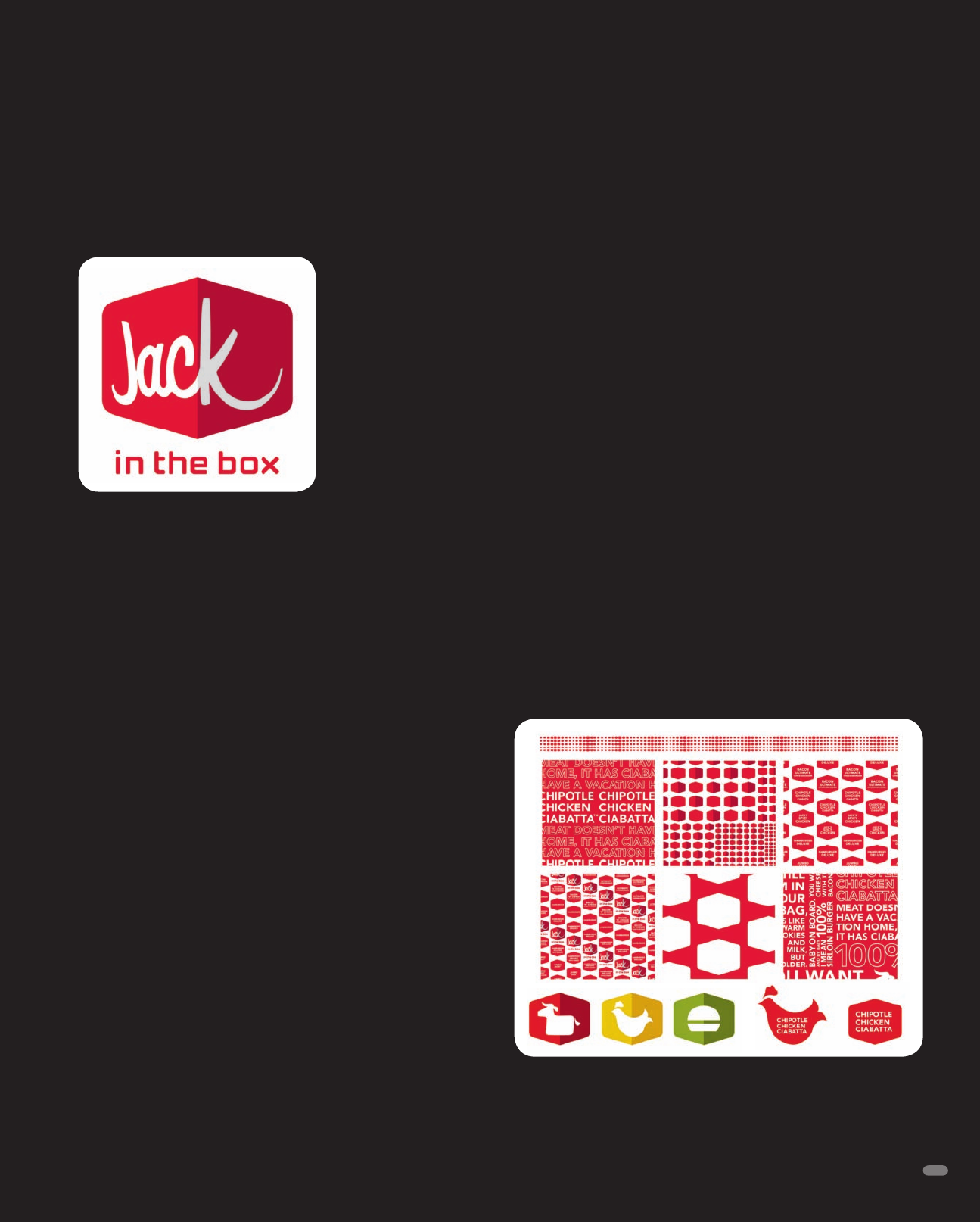 “The type we chose lends itself to the format for the icon. The
name box has its simple straightforward design and is also a nice
complement to the Jack script. The script is more free-ﬂ owing,
and the type below reigns that in a bit,” Duffy explains.
The outline of the box shape creates a proprietary mark for Jack in
the Box, one that can be repurposed in other ways—as a container
for graphics or other type, for instance. It is also repeated to create
large and small graphic patterns that will be used for packaging,
POS, signage, advertising, and corporate communications.
“The Jack in the Box restaurants offer a higher quality product and
a broader range of menu items—you can have what you want,”
says Duffy. “Everything about the restaurant needs to be of a
higher quality. This is a successful brand that needed revitaliza-
tion. The last thing you want to do is pull the rug out from under
the client’s loyal following. This identity is all about Jack and the
afﬁ nity customers have for him.”
One of the more oddly
charming fast-food
spokes-characters to
emerge from the crowd of
kings, clowns, dogs, and
other undefined mam-
mals in the past decade is
Jack, the round-headed,
business-suited charac-
ter who fronts for Jack in
the Box restaurants.
Created in 1995 by Chiat/Day/Secret Weapon, Jack has become
the very visible “head” of the 2,100-plus chain of stores, which
are located primarily in the western United States (the ﬁ rst of
which opened in 1951). His incongruous head and attire, com-
bined with his take-charge attitude, is quirky and forceful. He is
large (-headed) and in charge. He has the customer’s best inter-
ests in mind always.
“Jack has become the personality of the chain—it’s all Jack,” says
Joe Duffy, principal of Duffy & Partners, the Minneapolis-based
design ﬁ rm who was invited to create a new brand identity that
matched Jack in verve and quirk. “He watches over everything and
makes sure the customer gets what he wants. Customers have
developed a real thing for Jack.”
At the time Duffy’s team began work on the project, the chain’s
existing identity was somewhat spiritless. The logo was composed
of fat, tubular, all caps letters, some of which were conjoined in
rather awkward ways. The new identity needed to have the same
warmth as Jack—in other words, more human and humorous. The
client asked that the brand’s original red color be retained, but
everything else could be changed.
The Duffy team’s solution wrapped the word “Jack” around a
3-D-like box, stressing the brand’s key word. Set in a customized
script, in uppercase and lowercase, the name almost looks like a
signature—certainly appropriate for a brand that is based entirely
on an actual character. The logo is essentially his signature and
stamp of approval.
Jack in the Box
Identity Design
Duffy & Partners, Minneapolis, Minnesota
151
The new Jack in the Box logo, designed by Duffy & Partners, was
created to be the signature of the now iconic “head” of the chain,
Jack. In addition, the box shape that contains the signature is end-
lessly repurposable, as shown here in new icons and patterning.
TEXT
Black
(Provision RP) Logo Lounge 5
D209-128 / 4228 1st proof1st proof
LL5 142-153_NC_.indd 151LL5 142-153_NC_.indd 151 2/25/09 9:55:01 PM2/25/09 9:55:01 PM