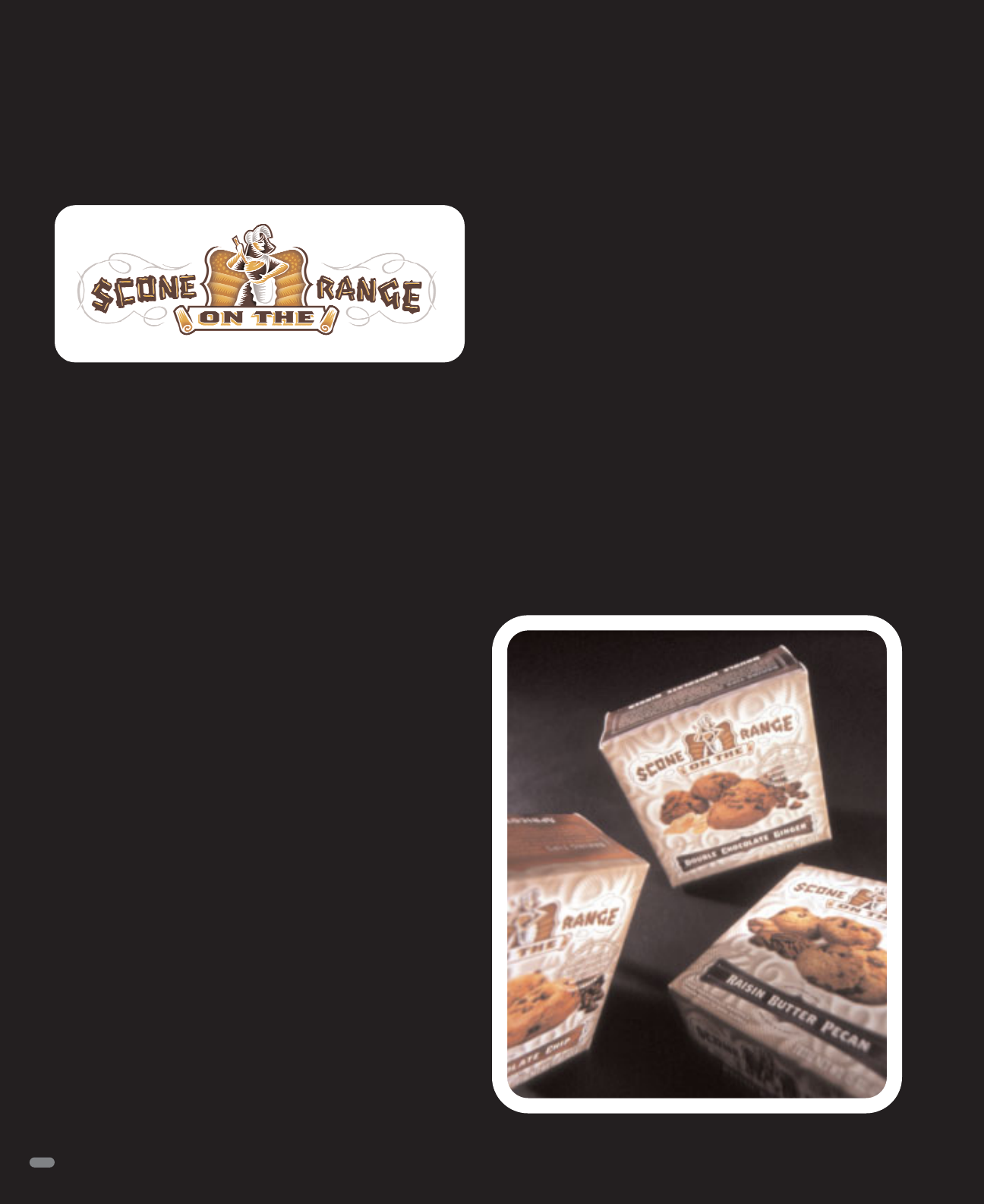 What’s a designer to do when a brand-new client insists on using
log-style type as part of her new identity? If you were on the
design team at Gardner Design working on the Scone on the
Range brand, you cringed a little, then listened a lot.
Marilyn Naron had already had an unsuccessful experience working
with another design ﬁrm when she came to Wichita-based Gardner
Design seeking packaging and an i dentity for her line of frozen
scones. With the Chisholm Trail literally bordering her yard in
Lawrence, Kansas, and a wholesome, to-be-baked product for sale,
she had visions of the pra
irie in mind, mixed with the public-service
ﬂavor of the Depression-era Works Progress Administration (WPA)
and a hint of the inherent Britishness of scones. Perhaps, Naron
suggested, the logo could show a prairie woman standi ng at a
stove, surrounded by the product name set in log type.
Art directors Chris Parks and Brian Miller, together with principal Bill
Gardner, concentrated on ﬁnding a way to depict Naron’s vision. “In
the beginning, we thought it was hokey. But then we saw if we could
j
ust stick with this for a while, it might just work,” says Parks.
They decided to use the log type to evoke the image of pioneers,
but to contemporize it and the elements that would surround it.
After researching log typefaces, they discovered that most were
too detailed. Then the designers had a stroke of luck: On a
department-store box from the 1940s, they found a simpler face,
which they used as a point of departure for their own work.
The product was to be sold in grocery and health food stores, so it
needed to look simultaneously corporate and homey. They decid-
ed to make the packaging more corporate and keep the logo homey.
For the logo, the designers considered the type of crude graph-
ics one might see at a roadside produce stand. They set the name
in a log typeface, but it’s a face with some finesse. Centered in
the design is a graphical representation of Naron stirring dough
in a bowl, portraying the WPA heroine Rosie the Riveter had she
been standing strong on the plains. Other subtle touches, such
as setting on the in a scroll and gray curlicues in the background
add classic touches.
When evaluating colors, the designers noted that most of the
competing brands on the market used very dark colors, predom-
inately red and black.
“It was all very classic,” says Gardner. “So Chris really paid atten-
ti
on to making the Scone’s packaging different, but just as rich.”
The swirling, creamy tans and browns used for the company’s
boxes are certainly rich enough to give the product strong shelf
appeal, but they also allow the box to sit comfortably in health or
natural food stores, where many products are in brown or kraft
paper packaging.
Scone on the Range
Product Identity and Packaging
Gardner Design, Wichita, KS
84