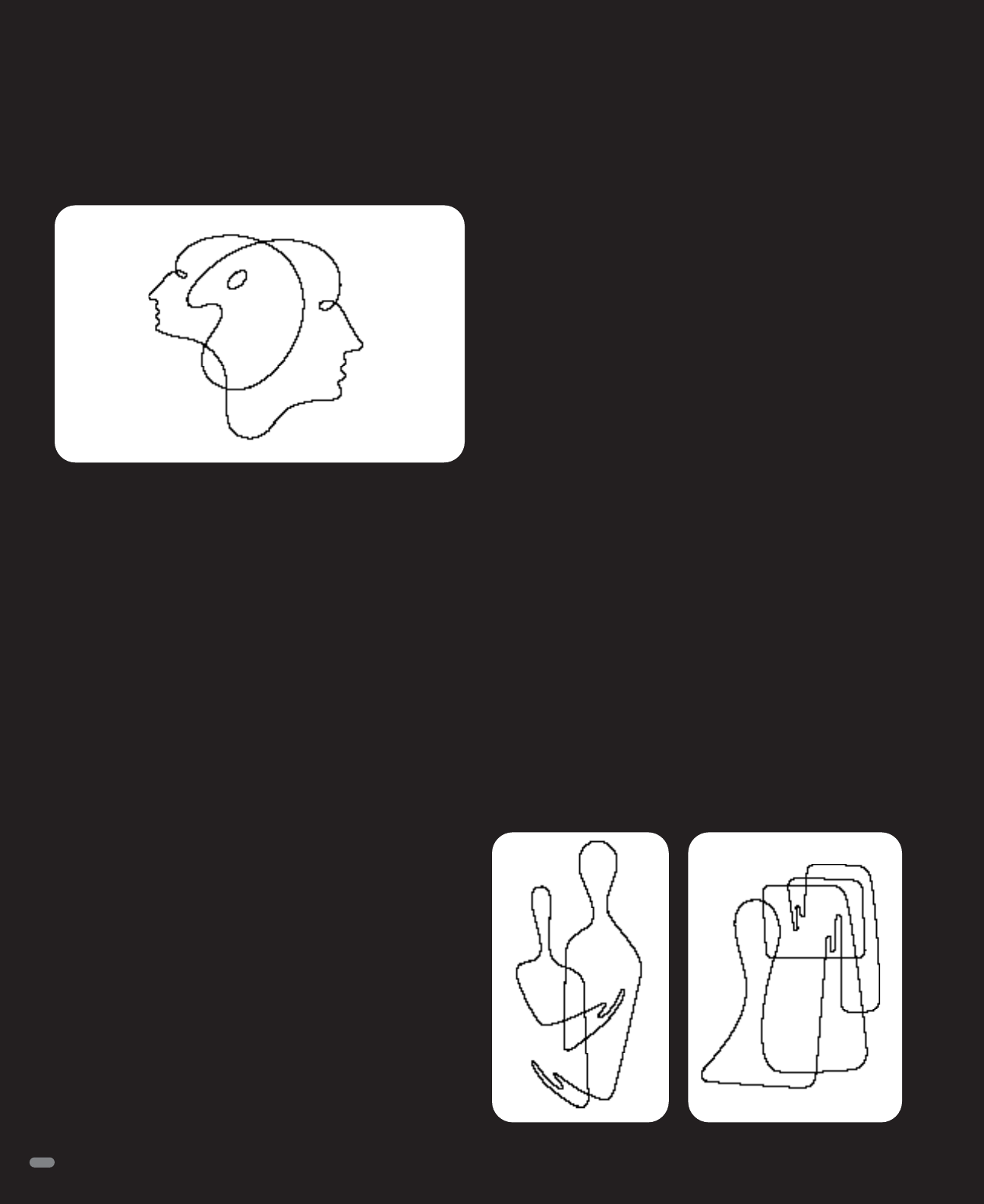 Felix Sockwell keeps plenty of killed work on his Web site for a
very good reason: He eventually sells most of it.
“If there is a good idea in it and i t hasn’ t been used publicly, it
goes onto the site,” says the former design director of Ogilvy &
Mather who’s now a successful solo designer and illustrator in
New York Ci ty.
An assignment for Informative.com, a business-to-business infor-
mation portal, is a recent success story. To create the Web site’s
new identity, Sock
well adapted two images from previous assign-
ments and resurrected a killed magazine assignment.
Sockwell’s involvement began when the art director of the agency
handling a logo project for Informative.com spotted an illustration
about health care on the Web that the artist had done for Time
magazine, but had been rejected. The elegant, simple drawing that
shows two people embracing or supporting each other was a per-
fect message for Informative’s Web site, at which businesspeople
can help themselves and others. The image would represent com-
munication on the site.
But that was just the beginning of the job. Informative.com’
s
organizers wanted a multi-logo identity, one in which logos could
be swapped as needed for different applications.
The second and third logos were adapted from images Sock-
well had done for Parsons School of Design posters several
years earlier. Both of these images—one a pair of profiles joined
by a palette to represent creativity or aesthetic and the other a
computer to represent digital communications—were greatly
simplified from their source images.
Although the client for this project is using the arti st’s unique line
style as a unifyi
ng element, Sockwell is not necessarily excited
when potential clients call him asking for “something linear.”
“You have to put something new into every j ob, no matter what
your style is,” he says. “The best thing to do is to look around at
what is being done and then do something different. I try not to
do anything that looks like an AT&T logo or Nike swoosh. I never
have done anything like those. Trends don’t last. I stick with con-
tent, and try to do something new with that.”
Once a logo is ready to be presented, Sockwell considers
it crucial
to show the client what he calls the logo’s “arms and legs.” He’ll
spend extra time and money demonstrating different applications
for the mark: What it could be applied to, how it could be produced,
what it would look like embossed, in various colors, and animated
for the Web.
Sockwell advises that it’s important for designers to k eep in mind
that they, the logo’s creators, likely will not be at every presenta-
tion of the proposed mark. “So you have to explain i t well,” he
says. “If the person presenting your work does not have his or her
head wrapped around your idea completely and there are ten
executives throwing out questions, that person will not be ready
to sell your idea.”
Informative.com
Multi-Logo Identity
Felixsockwell.com, New York, NY
102