Get full access to Managing the Testing Process: Practical Tools and Techniques for Managing Hardware and Software Testing and 60K+ other titles, with free 10-day trial of O'Reilly.

3.3. The Bricks and Mortar of the System: Test Cases

How exactly are test conditions created? At the highest level, I think of test cases as consisting of a sequence of actions, each action having potentially some associated test data and some associated expected result. Figure 3.4 gives a graphical illustration of the process, which I'll walk through in detail in the next few paragraphs. 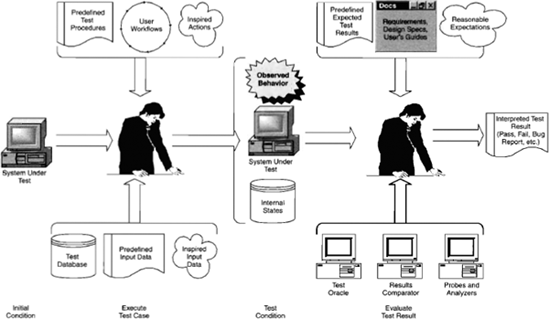 Assume that we start at step one of a test case, the first action to be taken. The system is in whatever initial condition is reached from the test suite and test case setup steps. Following our test procedures, system documentation, or inspiration, we deliver some data to the system ...

Get Managing the Testing Process: Practical Tools and Techniques for Managing Hardware and Software Testing now with the O’Reilly learning platform.