Get full access to MPLS-Enabled Applications: Emerging Developments and New Technologies and 60K+ other titles, with free 10-day trial of O'Reilly.

This section examines the forwarding and control plane mechanisms associated with P2MP LSPs. First we discuss how data are forwarded along a P2MP LSP. This is independent of the signaling protocol used to create the P2MP LSP. Then we discuss the two control plane mechanisms by which P2MP LSPs can be created: the RSVP-based scheme and the LDP-based scheme. 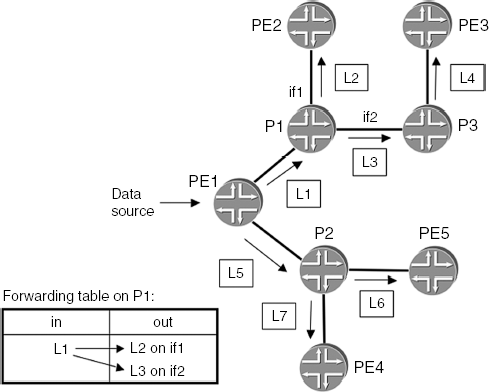 Let us consider the packet forwarding process on P1. For each incoming packet belonging to the P2MP LSP, P1 makes two copies, one of which is sent to PE2 and the other to P3. Let us look at this process in more detail. Packets arrive at P1 having label L1. Looking at the inset of the figure, which shows the forwarding entry corresponding to the P2MP LSP installed on P1, it can be seen that P1 has ...