Get full access to OS X Mavericks Portable Genius and 60K+ other titles, with free 10-day trial of O'Reilly.

Chapter 15 How Do I Install Microsoft’s Windows Operating System on My Mac? 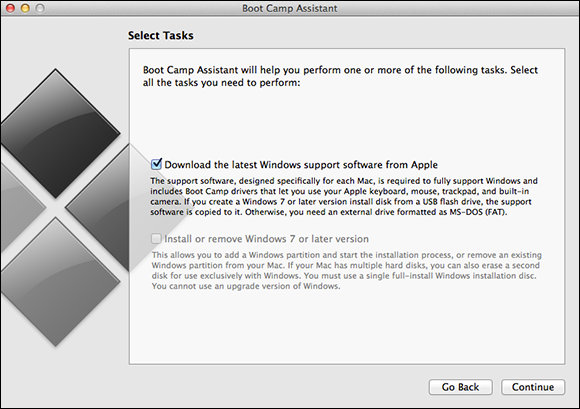 Because Macs are equipped with Intel processors, you can install Windows on your Mac just as you would on any other Intel-based PC. If you’re switching from a Windows computer to the wonderful world of Mac, having Windows installed can make the transition a little smoother. However, if you’re anything like the Windows converts I know, you will find yourself running Windows less and less as you become more familiar with Mavericks.

Boot Camp is a tool provided with Mavericks that helps walk you through the process of installing Microsoft Windows on your Mac. It’s a simple utility but one that performs some very big jobs, such as:

Booting from the Windows installation disc

Installing drivers in Windows that you need in order to use hardware that comes with Macs, such as the built-in camera (if you have one)

If you’re a longtime Mac fan, you may be dubious about the title of this section, but former Windows ...