Get full access to PowerShell: Automating Administrative Tasks and 60K+ other titles, with free 10-day trial of O'Reilly.

Since commands on the pipeline have access to object properties, several general-purpose cmdlets exist to perform common operations. Since these cmdlets can work with any kind of object, they use Object as the noun (you remember the Verb-Noun naming convention for cmdlets, right?).

To find the list of these cmdlets, we can use the Get-Command cmdlet: 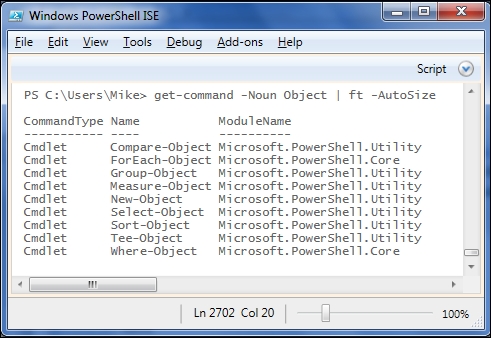 ft is an alias for the Format-Table cmdlet, which I'm using here to get the display to fit more nicely on the screen. It will be covered in depth in Chapter 5, Formatting Output.

The Sort-Object, Select-Object, and Where-Object cmdlets are some of the most used cmdlets in ...