Get full access to Python Playground and 60K+ other titles, with free 10-day trial of O'Reilly. 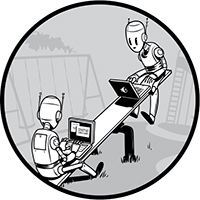 You can use a computer to study a system by creating a mathematical model for that system, writing a program to represent the model, and then letting the model evolve over time. There are many kinds of computer simulations, but I’ll focus on a famous one called Conway’s Game of Life, the work of the British mathematician John Conway. The Game of Life is an example of a cellular automaton, a collection of colored cells on a grid that evolve through a number of time steps according to a set of rules defining the states of neighboring cells.

In this project, you’ll create an N×N grid of cells and simulate the evolution of ...

Get Python Playground now with the O’Reilly learning platform.