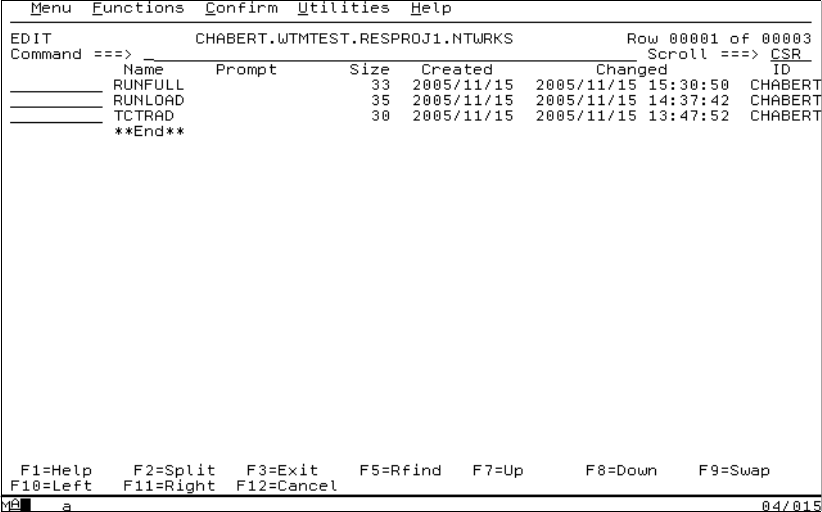 1102 Supporting On Demand Business Applications with the IBM Problem Determination Tools
32.1 WTM-generated scripts review
Every WSim script has two components:
򐂰 Network definition statements describing the configuration of the network being simulated
򐂰 Message generation decks that send and receive messages
In this section we review some of the scripts that were created by WTM to illustrate what was
being done behind the curtain. The network definition files, created by WTM when the
simulations were being prepared (described in the previous chapter) are presented in
Figure 32-1.
Figure 32-1 List of network definitions generated by WTM 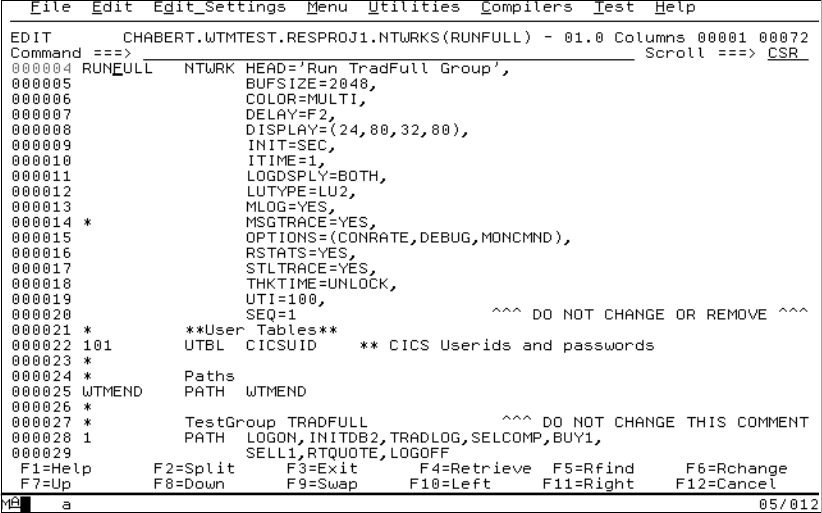 Chapter 32. Basics of scripting for Workload Simulator 1103
The network definition for the simulation RunFul is presented in Figure 32-2 and Figure 32-3
on page 1104. Definitions and significance of the entries are presented in the the following
figures.
Figure 32-2 Network definition RunFull (1 of 2)
The NTWRK statement is always in the first position in the network definition. This network is
named RUNFULL. The parameters include the following:
HEAD A comment that will be shown on reports.
COLOR Multiple color support.
DELAY Delay time, in this example set to two UTIs.
DISPLAY Primary and alternate screen sizes.
INIT The secondary LU (terminal) will initiate the session.
ITIME Time (in minutes) between interval reports.
LOGDSPLY Write display buffer to log both before and after message generation.
LUTYPE 3270 type terminal.
OPTIONS Options for this network are:
CONRATE Print interval reports at the WSim console.
DEBUG Write trace data for TCP and CPI-C.
MONCMND Show console commands initiated in a MSGTXT on the WSim
console.
RSTATS Response time statistics to be accumulated for LUs
STLTRACE STL trace records to be written to the log.
THKTIME When
think time delay interval begins (in this case when the keyboard
is unlocked).
UTI Network-level user time interval in 0.01 seconds. 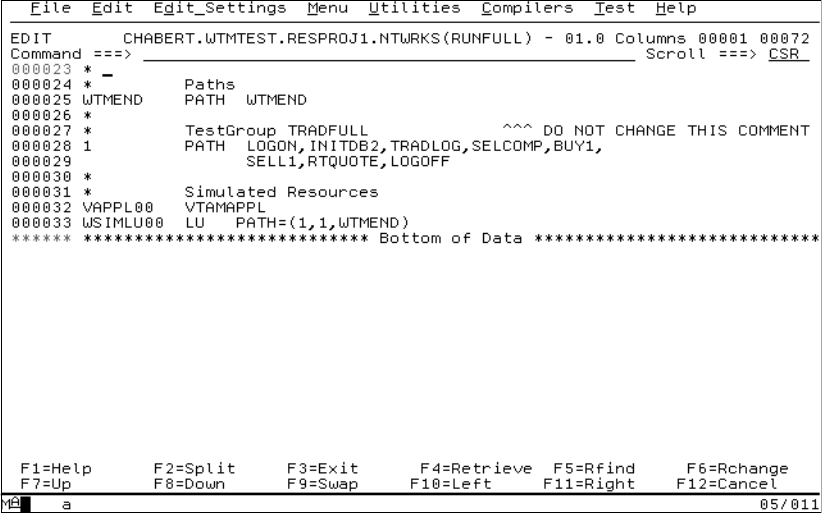 1104 Supporting On Demand Business Applications with the IBM Problem Determination Tools
The UTBL statement defines that the user table CICSUID will be used in at least one of the
corresponding STL programs. It references the member CICSUID in the partitioned data set
(PDS) CHABERT.WTMTEST.RESPROJ1.MSGTXTS. The name of 101 was assigned by
WSim to this UTBL.
The first PATH statement, named WTMEND, defines the MSGTXT WTMEND that was
automatically generated and inserted by WTM to issue the zend WSim console command to
end the simulation run.
Figure 32-3 Network definition RunFull (2 of 2)
The second PATH statement, named 1, defines the list of MSGTXTs and the order in which
they will be executed.
The VTMAPPL statement must precede any LU statements and defines that the following
LUs will simulate VTAM resources.
The LU statement defines a single network resource and the script program path to be
executed by it, in this case the path 1 first and then the path WTMEND. 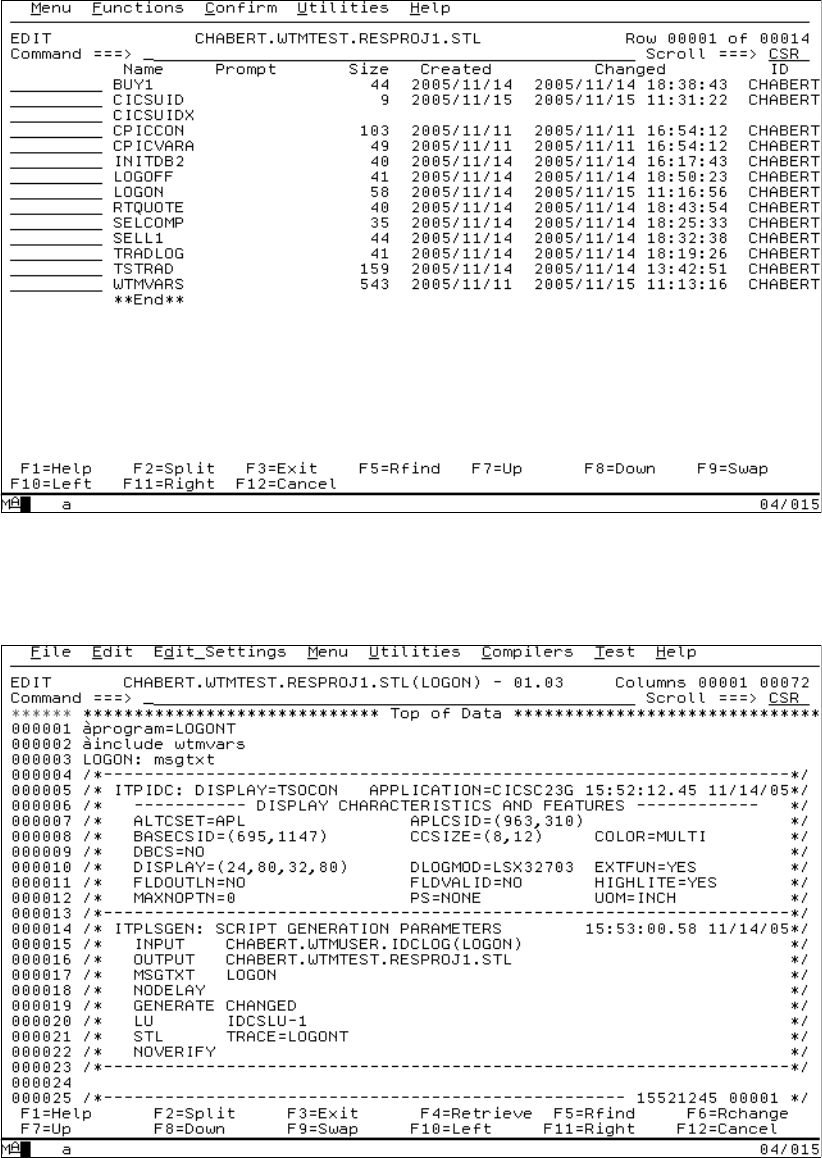 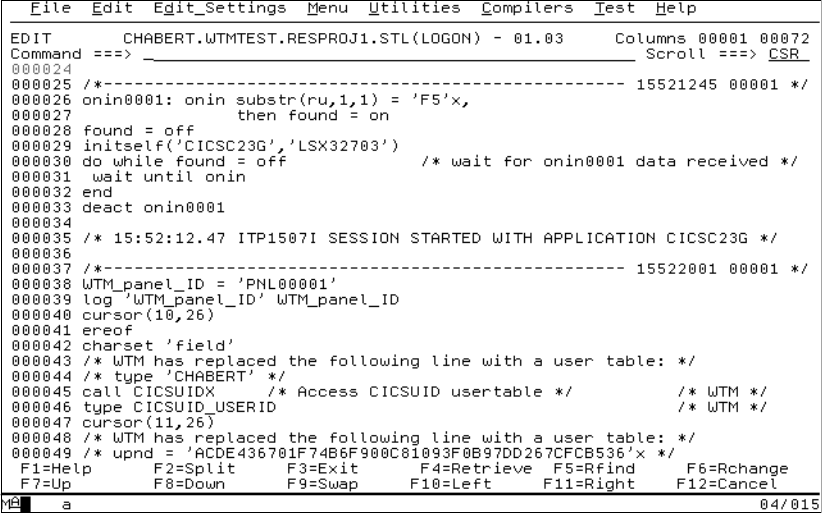 1106 Supporting On Demand Business Applications with the IBM Problem Determination Tools
The statement @PROGRAM specifies the start of the STL program and defines its name, in
this case LOGONT.
The statement @INCLUDE retrieves a member from the SYSLIB concatenation as program
statements. The member WTMVARS is a standard include member for WTM.
The statement MSGTXT defines the name of the MSGTXT member to be generated from this
STL program, in this case LOGON.
The statement ONIN, as shown in Figure 32-6, is an asynchronous statement.
Figure 32-6 STL program for test case LOGON (2 of 3)
It will set the value of the variable FOUND to ON when the first character of the variable RU is
equal to the hexadecimal ‘F5’. The variable RU is a special variable that contains the SNA
request/response unit portion of incoming or outgoing data.
The value of the variable FOUND is first set to OFF.
The statement INITSELF starts a session with the VTAM application with APPLID CICSC22F
from this LU. User data, which equals LSX32702, is also sent to that VTAM application.
The statement DO WHILE loops executing the statement WAIT UNTIL ONIN until the session
gets initialized and a response is received.
The statement DEACT ONIN0001 deactivates the asynchronous ONIN statement labeled
ONIN0001.