We covered the slope-intercept form of the equation of a straight line in our chapter on graphing, and we will repeat some of that material here. We will also show a few other forms of the straight line equation. 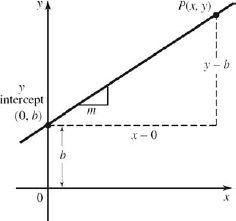 This is called the slope-intercept form of the equation of a straight line because the slope m and the y intercept b are easily identified once the equation is in this form. For example, in the ...