Get full access to The Financial Times Guide to Corporate Valuation and 60K+ other titles, with free 10-day trial of O'Reilly. 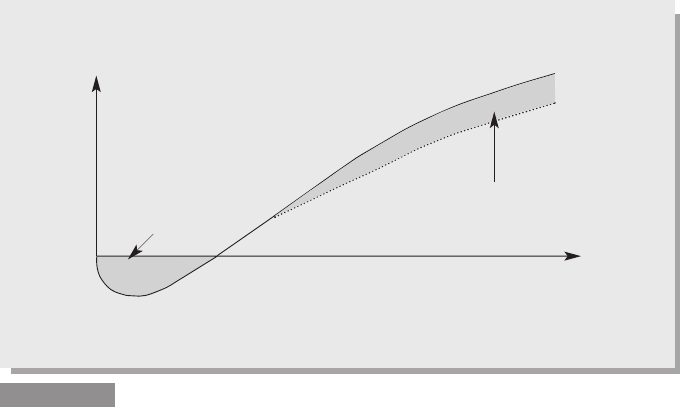 16 The Financial Times Guide to Corporate Valuation
incentive programme is to be treated as salaried income for the employees.
The consequence is that an employee is obliged to pay income tax and
the company to pay social security expenses on the entire programme.
A common stipulation from tax authorities is that the price of the share,
convertible or option, which employees are entitled to acquire, must
reflect a market-based value.
When dealing with tax authorities, and this is likely to be universal,
it is better to be safe than sorry and have an independent party, often an
accountancy firm or an investment bank, to do the valuation in order to be
able to argue effectively for the objectivity of the valuation used.
Figure 3.2 shows a generic theoretical development of a company’s value and
cash flow.
Executing a merger, acquisition or divestiture
When Mobitronics had been in business for ten years the company was
contacted by representatives from PayMobile, a small niche player with a
strong competence in internet-based, mobile applications. The represent-
atives for PayMobile expressed an interest in selling the company. After
thoroughly analyzing the acquisition opportunity, Mobitronics’ manage-
ment believed there was a clear strategic fit between the companies and
that an acquisition of PayMobile would strengthen Mobitronics’ service
Value
Time
Capital need 1
Capital need 2
Phases: Seed Start Development Expansion Exit LBO/MBO
FIGURE 3.2 The ‘expected’ evolution of a company
3

When do you need to value a company? 17
offering and R&D competence. However, as cash reserves were limited,
Mobitronics would carry out the acquisition only if PayMobile would
accept Mobitronics’ stocks as payment.
In a share-for-share transaction both the acquisition target and the
acquirer need to be valued. In this situation both sides will want to maxi-
mize the value of their respective asset and minimize the value of the
other – all in order to achieve the maximum relative value. Normally, a
mixture of valuation models is used to get a number of reference points
for the valuation discussion. Typically, some type of standalone DCF val-
uation is used for a fundamental discussion of the two companies, their
operations and their future earnings potential. In addition, financial and
operative ratios are used to allow for effective comparisons in the discus-
sions and negotiations.
The idea behind this kind of transaction in valuation terms is that the
value of the combined entity will be more than that of the separate enti-
ties. In industrial transactions, the price that the acquirer is willing to pay
usually exceeds (and, in theory, should always
exceed) the value a financial buyer would ascribe
to the company. This is because the industrial
party can pay not only for the pure financial
value, but also for synergies and other operating
and strategic values. These are values the financial
buyer or the capital market simply cannot real-
ize. Since an industrial acquirer normally can pay
a higher price than the financial markets, price
is normally not the only critical concern. Instead, the loss of independ-
ence and management issues are often of equal importance (sometimes to
shareholders’ despair). However, as has been seen in transactions in the
past decade, it is not uncommon that financial buyers, typically private
equity firms, have a much more aggressive view of how much debt the
acquisition target can bear. In other words, private equity firms have been
using a much higher leverage than industrial acquirers and therefore have
been able to pay higher prices. (We will go through the mechanism of
why higher leverage results in higher valuations in Chapter 6.)
When valuation is conducted in an industrial deal the valuation technique
differs slightly from earlier situations discussed in this chapter. This is
because the synergies, economies of scale and other strategic assets have
a value that needs to be added to the value of the target company (see
Figure 3.3).
Private equity firms
have been using a much
higher leverage than
industrial acquirers
and therefore have
been able to pay higher
prices

Get The Financial Times Guide to Corporate Valuation now with the O’Reilly learning platform.