Evidence for the Big Bang

Down a private road on top of Crawford Hill in Holmdel, New Jersey, is a 15-meter horn-shaped antenna built for Bell Labs and designed to pick up faint signals from an early NASA communications satellite. It achieved its purpose, and much more: the antenna ended up detecting signals that confirmed the Big Bang.

The Horn Antenna (Figure 104-1) was built in 1959 as part of NASA’s Project Echo. Rather than using powered satellites for communication, as is done today, Project Echo involved placing 30- to 40-meter spherical balloons in orbit and bouncing microwave signals off them. In 1960 the Echo 1A satellite was successfully launched and placed in low Earth orbit. Echo 1A, weighing 76 kilograms and made of a mylar polyester film, showed that satellite communication would work: TV and radio signals were transmitted to it, bounced off it, and received. 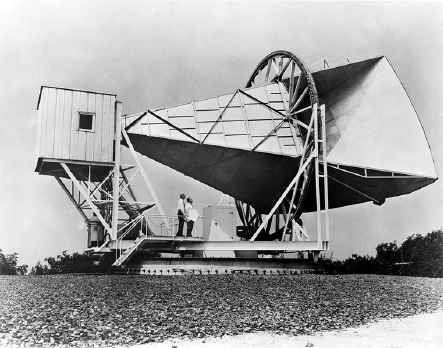 On August 12, 1960, the Horn Antenna at Holmdel received a message transmitted from California and bounced off Echo 1A: “This is President Eisenhower speaking. This is one more significant ...