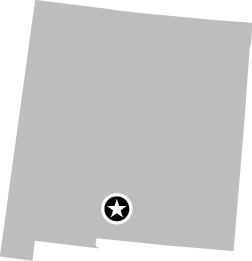 In 1944, the U.S. Army chose over 8,000 square kilometers in New Mexico to be the main site for U.S. rocket testing. The site became known as the White Sands Proving Ground, and in 1945 rocket experiments began. On July 16, 1945, the area was used for the first test of a nuclear bomb (see Chapter 106). Over in Europe, the U.S. was running Operation Paperclip to capture and offer jobs to as many valuable Nazi scientists as possible. One group, under Wernher von Braun, was transported to White Sands along with tonnes of missiles and equipment to help jump-start U.S. missile technology (see also page 71).

In 1946 the first V-2 rocket was launched at White Sands, and by the end of the year the German scientists working alongside U.S. service personnel had launched tens of V-2s across the White Sands Missile Range. The U.S. also tested versions of the V-1, renaming it the Loon.

The missile range still exists today and is in active use. Despite that, there’s a museum of missile history with multiple exhibits just inside the range, including an outdoor missile park with many types of missiles on display. Notable missiles include the Loon, a newly restored V-2, a Patriot ...