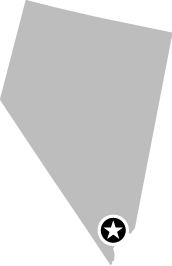 History of the Nevada Test Site

From 1951 to 1992, the U.S. (with a little help from the UK) exploded 1,021 nuclear bombs above and below ground outside Las Vegas, Nevada (see Chapter 110). Many of the tests were announced in advance, and the above-ground explosions were visible from Las Vegas, where they became a tourist attraction. Today, the history of the most prolific test site in the U.S. is documented at the Atomic Testing Museum.

Since this is Las Vegas, there’s a multimedia event to compete with the rest of the city’s attractions—the Ground Zero Theater. The visitor is seated inside a mock concrete bunker seven miles from a nuclear explosion. The countdown begins, and the bomb explodes. A blast of air rushes into the bunker and the entire theater shakes.

However, the museum is neither a glorification of nuclear bombs, nor a glitzy tourist attraction. Instead, it’s an informative and intelligent explanation of the Cold War and the chronology of nuclear testing. In addition to many photographs and films of nuclear explosions, the museum has exhibits of equipment recovered from the Nevada Test Site.