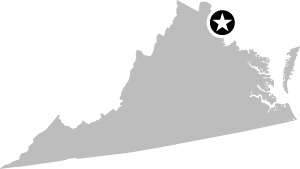 Unless you work for the CIA (or the CIA decides that you must visit their headquarters), you’ll have to make do with a virtual visit of the Kryptos sculpture on the CIA website. The sculpture (Figure 121-1), installed in 1990, is next to the new CIA HQ building and contains four encrypted messages. Three of the messages have been decrypted by the CIA and by members of the public. One section, however, remains a mystery to this day, and is believed not to have been cracked even by employees of the CIA and NSA. 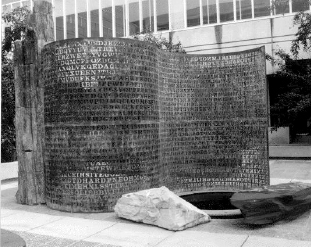 The sculpture is made of petrified wood, slate, and quartz, but its main part is a large S-shaped piece of copper with almost 2,000 letters cut into it. This copper panel consists of two distinct parts: a Vigenère tableau and the encrypted messages.

The Vigenère tableau is a table of letters used for encrypting and decrypting messages using the Vigenère cipher (see sidebar). When decrypted, the first three parts read as follows (the spelling errors are in the original text):

1. BETWEEN SUBTLE SHADING AND THE ABSENCE OF LIGHT LIES THE NUANCE OF IQLUSION

2. IT WAS TOTALLY INVISIBLE HOWS THAT POSSIBLE ? THEY USED THE EARTHS MAGNETIC FIELD X THE INFORMATION ...