Not only is the Magnetic North Pole difficult to get to, but it also moves over 10 kilometers per year, and it even moves in a rough oval as much as 80 kilometers each day. But it is roughly the spot to which compasses point when determining the direction “north.” Until GPS completely displaces compasses, for the purposes of navigation it’s important to know the location of the Magnetic North Pole and the lines of the Earth’s magnetic field (Figure 128-1). 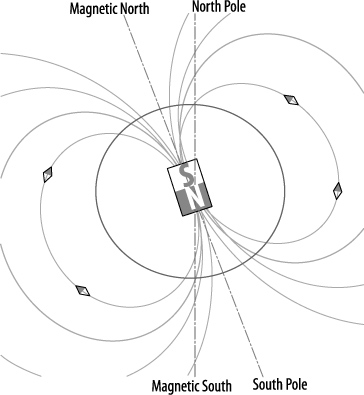 The Earth rotates on its axis, at 23.5º to the perpendicular to the Earth’s orbit around the Sun. The axis passes through the Geographic North and South Poles. The location of the geographic poles sets the lines of longitude; latitude is measured from the Equator, which sits halfway between the poles. The axis and the poles are the basic reference points for navigation.

Unfortunately, compasses do not point to the Geographic North Pole, but instead follow the Earth’s magnetic field and point approximately toward the ever-moving Magnetic North Pole. To compensate for this problem when using a compass, it is necessary to know the declination. At any point on the Earth, the declination is the angle between ...