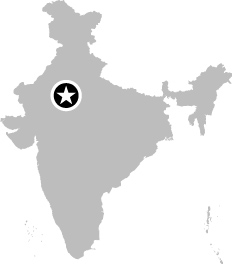 An Enormous Observatory in Stone

In 1728 the Maharaja Sawai Jai Singh II commissioned the building of an observatory as part of the newly founded city of Jaipur. The Jantar Mantar observatory (Figure 24-1) was renovated in 1901 and is now a popular Jaipur tourist attraction and respite from the noise and heat of the city that surrounds it. 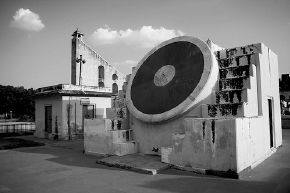 The Samrat Yantra is the largest sundial in the world at over 27 meters high, and is capable of telling the time, day or night, with an accuracy of about two seconds. Its design is slightly different from that of classical sundials, which consist of a stick (called the gnomon) that creates a shadow and a flat scale on which the time is read. The Samrat Yantra’s gnomon is a huge triangle made of local stone. The gnomon’s upper face is angled at 27° (the latitude of Jaipur), and the gnomon follows the local meridian, with the highest point pointing to geographical north. The shadow cast by the gnomon falls on a pair of marble-faced curving quadrants on the east and west sides of the Samrat Yantra. The quadrants are curved so that, unlike on a ...