The Taipei 101 is the tallest occupied building in the world, with 101 floors overlooking Taipei’s business district. But Taipei is prone to both typhoons and earthquakes, so the skyscraper contains a 660-tonne, gold-colored pendulum near the top to prevent the building from swaying and vibrating. It is the largest and heaviest such pendulum in the world.

Many skyscrapers contain such devices, called tuned mass dampers, for the same purpose, but the Taipei 101 pendulum is unusual because it is on public view (Figure 34-1). It hangs between the 87th and 91st floors, and there are public viewing areas on the 88th and 89th floors. It’s even visible from the restaurant and bar. Two other tuned mass dampers, located in the building’s pinnacle, are not on display and are tiny by comparison: they weigh only 6 tonnes each. 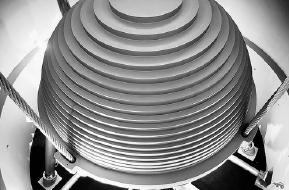 The ball is made of forty-one 12.5-centimeter steel plates welded together for a total size of 5.5 meters. ...