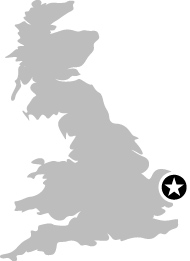 It’s Bigger Than You Think

RAF Neatishead is the site of the first secret air defense radar in Britain, and today houses a museum that covers the history of radar from its invention through the Second World War and up to the end of the Cold War. Everything in the museum is authentic, including the Cold War operations room where you are invited to sit at one of the terminals and try to deal with a four-minute warning of a nuclear attack. The early-warning equipment was still in use in 1993.

The history starts with the Second World War. You’ll see the operation rooms that were in use during the Battle of Britain and the Blitz, where information from early radar systems was translated as fast as possible into positions marked on maps on large tables.

Britain’s first early-warning system, the Chain Home coastal radar stations, consisted of 110-meter-high towers that broadcast radio signals with a wavelength of 10 to 15 meters. The radio signals bounced off approaching aircraft, and by timing the delay between transmitting a pulse of radio waves and receiving the bounced signals, it was possible to calculate ...