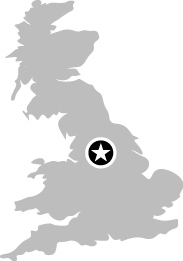 From 1795 to 1923, one of the world’s first steam engines ran at the Elsecar New Colliery in Yorkshire, pumping water from the mine. Steam pumping allowed deeper mining of coal than had previously been possible. In 1923 the steam engine was replaced by electric pumps, although it briefly ran again in 1928 when the electric pumps became overwhelmed by flooding in the mine. Happily, the steam engine was not destroyed, and today is the only surviving example of a Newcomen Beam Engine still in its original location.

The steam-powered pump at Elsecar was invented by Thomas Newcomen in 1712, and until James Watt invented his steam engine in 1763, the Newcomen Beam Engine was the way to get mechanical power from steam. Newcomen’s engine was also the first steam engine to enter widespread use: over 100 were installed throughout the UK and across Europe.

Newcomen’s engine was inefficient—only about 1% of the energy in the steam was actually converted to mechanical work—and required a large amount ...