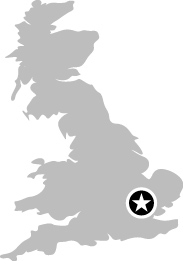 The Kelvedon Hatch Nuclear Bunker looks like a fantasy hiding place straight out of a movie. Driving by, all you see is a bungalow tucked into a wooded area of the Essex countryside. But the bungalow is, in fact, the entrance to a secret underground facility that was designed to house up to 600 people.

The bunker was created in 1952 and used until 1994 as a safe place for central government to reside in the event of a nuclear war. Once inside the bungalow, the bunker is reached via a 120-meter-long tunnel leading to the lowest level of the facility. At the end of the tunnel are 1.5-tonne blast doors that protect the bunker from a nuclear explosion.

Inside, there is equipment for electricity generation, air filtration and pressurization (the bunker was kept at positive air pressure to prevent radioactive fallout from entering), and a water supply from a deep bore hole. Much of the bunker’s equipment was built for communication with the outside world and to ...