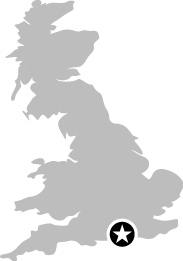 It’s a rare treat to see a working steam engine, and it’s even rarer to see one in situ, right where it was meant to be. At Kempton Park, the huge Number 6 Worthington Triple Expansion Steam Engine was used to pump 72 million liters of water to North London each day. The engine (along with a twin) ran 24 hours per day, 7 days a week from the late 1920s until 1980.

Today, Kempton Park Waterworks is still supplying water to London (at a rate of 284 million liters per day) using electric pumps. Happily, the Number 6 engine has been restored to full working order—which required building a new steam boiler, because the old one had been demolished—and can be seen steaming seven weekends per year.

The engine stands almost 19 meters high and weighs 725 tonnes. It consists of three cylinders of different sizes. High-pressure steam enters the first, smallest cylinder at almost 14 times atmospheric pressure. The steam then passes into the second, larger cylinder at a lower pressure, and finally into the third and largest cylinder. Each cylinder has a piston connected to the same ...