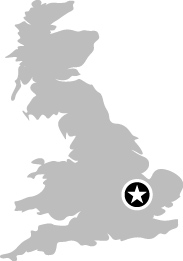 The Royal Gunpowder Mills are set in 70 hectares of countryside. Such a bucolic location might seem unusual for a factory, but if your factory has a habit of exploding, it’s best to have it spread out over a wide area to start with. The Waltham Abbey mills have blown up at least 12 times in their 300-year history.

Luckily for visitors, the mills are no longer likely to explode, as they stopped operating in 1991. The site has been open to the public since 2001.

The site’s history goes back to 17th century, when it started life as a mill creating gunpowder by grinding up potassium nitrate, charcoal, and sulphur into black powder. As technology progressed, the site was used to create guncotton and Cordite (see sidebar) and then TNT and RDX (the power behind the well-known plastic explosive C-4). After the end of the Second World War, when the demand for explosives was drastically reduced, the site was used to do research and development of new explosive compounds and propellants for rockets.