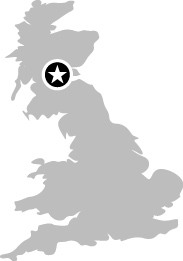 The Union Canal starts in Edinburgh and heads roughly westward, following the contours of the land until it reaches Falkirk in central Scotland. The Forth and Clyde Canal starts outside Glasgow at the Firth of Clyde (which links to the Atlantic Ocean) and heads roughly eastward, ending at the Firth of Forth (which links to the North Sea). But at Falkirk the two canals meet, and are linked by a stunning and unique boat lift.

The boat lift is needed because there’s a 35-meter drop from the Union Canal to the Forth and Clyde Canal. The link was originally navigated by traversing 11 locks over 1.5 kilometers. But in 1933 the locks were dismantled, disconnecting Edinburgh from its historic water link to Glasgow.

Boats arriving from the ...